In the wake of one of the most epic overreactions to a joke in television history -- Will Smith slapping the sh*t out of Chris Rock -- it's important to take a moment and recall the numerous occasions where celebrities bore the brunt of roasts so unthinkably savage we're surprised violence didn't ensue.

Down below we take a stroll through the five most brutal stings delivered by award show hosts.

Nothing beats Ricky Gervais' napalm-infused roast of his entire audience at the 2020 Golden Globes. Gervais procedurally chops and roasts everyone in the room like a Benihana chef of insult comedy, starting with Felicity Huffman's college cheating scandal before calling everyone in the room friends with Jeffrey Epstein and finally taking a dig at Catholicism itself. No one was spared. One of the best parts has to be Tom Hanks' repeated look of shock. Delicious.

May the legend rest in peace, Norm Macdonald floated like a butterfly and stung like a chainsaw-wielding bee in his nigh-mythical destruction of sport's biggest names at the 1998 Espy's. Delivered with the trademark Norm smile and unrepentant wit, one of comedy's greatest greats ensured he would never host the Espy's or anything like it again with an absolute buffet of celebrity-slaying that echoes to this day.

Up next we have a bit that's a lot sillier and arguably less brutal than some of the nuclear bombs dropped by Gervais and Norm, delivered by Seth Macfarlane in very Seth Macfarlane fashion. While putting on a display of legit singing chops, Macfarlane pipes an original number dubbed 'We Saw Your Boobs" -- a song in which he highlights step by step every nominee in the audience who'd gone topless.

While we wouldn't think this is particularly savage, considering everybody named was paid highly to voluntarily act in the films they starred in, when you see the faces of the thoroughly unamused targets of Macfarlane's musical jest, we're surprised no hefty slaps were delivered back then either.

Coming up in number four, we have the brilliant duo Tina Fey and Amy Poehler joining forces once again after partnering for SNL's Weekend Update segment for years. While most of the bit is, for the most part, gentler than some of the previous roasts there are a few lines whose utter savagery becomes highlighted for that very reason.

Finally, we have Colbert's decapitation of Bill Maher at the 2017 Emmys. While Colbert pulls no punches through most of the speech, we've timestamped the one joke in particular that nets it a place in the top 5 in which he sends a cannonball through the chest of a fellow political satirist. Maher had only just emerged from the almost career-ending hot water he found himself in after referring to himself as a "house n****r" during a conversation with Nebraska Senator Ben Sasse. 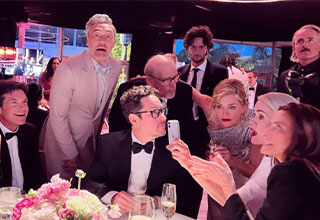 NEXT ARTICLE Celebrity Reactions to the Oscars Slap