Q: Welcome, Fred. Thanks for being with us and agreeing to the interview. So to begin, would you mind introducing yourself and letting us know what you’ve been up to lately?

A: My name is Fredrick Brennan. I made 8chan in 2013, quit in 2016. Lately, I've been not really working on imageboards at all. I've pretty much taken up an entirely different career. I've been working on a font editor, different fonts and stuff. I've even gotten paid to do a few of them.

***I've decided that I'm going to give you only Fredrick's answers, and not any of the questions he was asked. It's really funny out of context and will leave you laughing and confused. But if you want to get proper context and understand the full story, to just go read the whole interview yourself. It's so detailed and gives you a great understanding as to who Fredrick believes is the man behind QAnon.***

Fredrick: This guy posted that he was starting a new website for the users of the /r9k/ board. It was called "Wizardchan." I used it for a while, and then, because it was such a tiny site and nobody really cared about it, I came to own it when the owner got involved in a gay relationship.

Fredrick: It comes from a Japanese saying — now obviously not like a traditional Japanese thing, a Japanese meme really — on imageboards and stuff, the [saying is] that if you go to the age of 30 without having sex, you become a wizard. So that's where the name of the site came from.

Fredrick: Then, basically, the same thing happened to me except it was a straight relationship. So I had to give it to somebody else. Wizardchan has a very weird history of transferring between young people who think, "Oh, this is it. I'm never going to have sex. I'm going to be a wizard." And then boom, they end up getting into a relationship and giving up the site.

Fredrick: It's funny because I thought that 8chan was an original idea, but actually, there was already one like it that had closed a long time before called "imageboard4free." So I thought when I was tripping, "Oh, this idea of combining Reddit and 4chan is very novel." So I worked on the software and I never really expected it to become that big.

Fredrick: It was really crazy. We went from a hundred posts in a day to like 7,000 in an hour right after Gamergate. 4chan itself, at that time, was only getting like 20,000 posts in an hour, so we were already comparable. 8chan was the number two imageboard in the world for a long time.

Fredrick: I would think that a big group of anonymous users will find more truth than falsehoods. I think we've seen that this is not, at all, the case. QAnon is a great example of that, where it's like, this is so obviously bullshit, but they're researching it all the time and yet they can't see that.

Fredrick: All men are on a scale from 0 to 10 in attractiveness. Those who are below, let's say a 6, so like 0 to 5, will never have any mate at all. Those who are like 6 or 7 will be paired with the lowest females, so 0 to 5 on female attractiveness. Then, the top of the men, 8, 9 and 10, will basically screw all the women, and this is the theory.

Fredrick: So when I actually got into a straight relationship, they just immediately amended their worldview to make things continue to make sense. What they said was, "Well, people like Fred are actually negative on the scale." So, because I'm negative on the scale, women will have sex with me for pity or for a fetish or whatever. So they came up with a new reason and it's like, I became a part of their evolving doctrine of what they would call the "red pill."

Fredrick: The guy who made this imageboard software called "Tinyboard" admitted to me regularly that he wrote his software while on cocaine.

Fredrick: So yeah, I resigned in 2016, and due to that, I think they really felt like, "Holy shit, this guy knows too much. We can't let him quit." So they moved me to the 2channel part of the company, totally different, all my coworkers were suddenly Japanese and I became just a pure programmer.

Fredrick: I never believed in Q and never thought there was any legitimacy to any of the Q narrative. I could immediately see that all of this Q stuff was bullshit. Even though there were very few debunkers at the time, their information was very good, and it was not hard to debunk Q back then. I started to realize that these people just want to believe this because they want to come up with excuses for why they still support Donald Trump — even though he's not doing the things that they want.

Fredrick: I'd gotten really lazy living in the Philippines. I got really fat too. I've actually lost weight since then, but yeah, I was technically morbidly obese. I couldn't even necessarily take care of myself the same way as before.

Fredrick: I think that originally, on 4chan, Q was basically just started by a troll. But because Q was an anonymous poster who did not put a tripcode, somebody else started using a tripcode and that's when it started to become like this thing that you could own. In the beginning, Q was not really something any one person could own, but then it became something that could be owned when a tripcode got involved. When the tripcode got leaked and it moved to 8chan, the reason that happened was because 4chan does not allow any trolling of an outside target. Yes, they are famous for that, but their rules technically don't allow it and they will ban you. What people outside don't tend to know is that 4chan banned GamerGate, and they were about to ban Q. So basically, I believe that whatever troll was managing it, probably Paul Ferber, moved it to 8chan and started posting the "Q drops" on 8chan.

Fredrick: I was sitting at my computer trying to post, trying to make any post on 8chan just to see if it was possible, and I couldn't. But you know who could? Q could. I know the reason Q could because in the software that I wrote, if you make a post through the admin panel, it is prioritized above every other post. So that's why I fully, fully believe that they took over Q just because of when it went down for those three months in 2019. For me, that sealed the deal — the Watkins’s are Q. A third-party Q would never tie themselves to 8chan.

Fredrick: I escaped with hours to spare. If I had not escaped in time, I would have been put in indefinite immigration detention until the case was done, and that could have lasted years as a foreigner in the Philippines. If you're accused of what they consider to be a serious crime, they are not going to let you out of immigration detention because they're afraid you're going to flee.

Fredrick: It is just one big room. It doesn't have a ceiling. It's just a tarpaulin that's full of rats. They call it the "Bureau of Immigration Bicutan Detention Center." It is a really screwed up place. It's 400 percent overcrowded. I had to basically flee for my life. 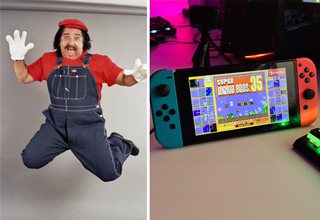 NEXT ARTICLE 'Super Mario Bros. 35' Is Free but Not Worth Your Time