In a world where news (and fake news) spreads like wildfire over the internet and social media, it seems like few things surprise most of us these days. When the recent allegations surfaced that Donald Trump (pre-presidency) had sex with a former adult film star and paid her $130,000 to keep it on the DL most of us didn't even bat an eye.

Daniels took and passed a polygraph test and on friday the magazine published a full transcript of her interview (the details have not been independently verified by POLITICO).


1. Trump offered Daniels a spot on "The Apprentice".

During a visit at the Beverly Hills Hotel, Daniels recalls that Trump was "obsessed with and terrified of Sharks". Trump stated that he donates to "all these charities, but would never donate to one that helps sharks" and even going as far as stating "I hope all the sharks die".

I'm no marine biologist but I'm fairly certain that would cause an ecosystem breakdown of epic proportions.

Daniels said the sex with Trump was "nothing crazy" and Trump had no unusual requests like "chain me to the bed or anything like that". "It was one position, basically what you would expect someone his age to do. It wasn’t bad. Don’t get me wrong.”

Daniels said she can "describe his junk perfectly, If I ever had to" and that Trump seemed smitten with her after their encounter. The two reportedly did NOT use a condom due partly to her allergy to latex.

4.  Trump was not interested in discussing his wife, Melania.

Daniels recalls asking Trump "what about you wife" to which he quickly changed the subject and simply stated "don't worry about her". Melania had just given birth to their son Barron a few months prior to the encounter.

Daniels went on to include that she "never saw Melania at any of their meetings and has never seen the now First Lady in person."

After their sexual encounter, Daniels recalls that Trump called her roughly every 10 days, often referring to her as "honeybunch". She said she had the direct number to his office and Trump would always take her calls or call her back right away.

The incoming calls were often from blocked numbers and the phone conversations eventually came to an end when she stopped answering calls from unknown or blocked numbers.


6. Trump was spanked by Daniels with a Copy of Forbes Magazine, particularly an issue that featured himself on the cover.

Daniels told a consultant from "Mother Jones" that  "one time he made her sit with him for three hours watching shark week, and another time he had her spank him with a Forbes magazine.” Daniels said the spanking came during a series of sexual and romantic encounters with Trump and that it involved a copy of Forbes with Trump on the cover.

7. Trump asked Daniels to autograph one of her DVDs for him.

Apparently Trump had one of Daniels' adult film / DVDs in his room and asked her for an autograph after the two had sex. Daniels said Trump had gotten the DVD from a gift bag given out at a charity golf tournament where she was doing an appearance for her company. She signed the DVD and even made it out to Trump.

Bonus:  Trump told Daniels that he believed his wealth and his power are "linked to his hair". According to Daniels, she at one point asked him about his infamous, enigmatic hairstyle. “He said he thought that if he cut his hair or changed it, that he would lose his power and his wealth,” Daniels said, "and I laughed hysterically at him.”

You can check out a video of POLITICO's 2009 interview with Stormy Daniels below: 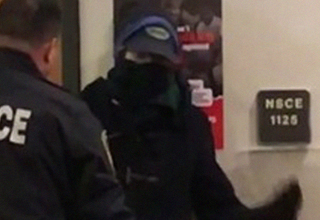 NEXT ARTICLE Astronomy Professor Freaks Out Students in Off-Topic Rant