Amber Heard recently stated in her defamation trial that her role in "Aquaman 2" has been drastically changed and her character has had many scenes reduced. She stated that Warner Bros. "didn't want to include me" in the DC sequel.

Heard claimed that she was scheduling filming until her ex-husband, Johnny Depp, took her to trial. Since then, she claims communication with the studio has stopped.

"I was given a script and then given new versions of the script that had taken away scenes that had action in it, that depicted my character and another character, without giving any spoilers away, two characters fighting with one another, and they basically took a bunch out of my role," she stated to the court.

Nearly at 4.2 mil signatures. Can we make 5 by the end of the trial? If you have already signed, share it out. #JusticeForJohhnyDepp

Heard stars alongside Jason Mamoa as, Mera, in DC's "Aquaman" and "Zack Snyder's Justice League". She has a three-movie contract with Warner Bros. and "Aquaman and The Lost Kingdom" will be her final film. However, it seems Warner Bros. sees Heard as a liability after enlightening details about her and Depp's relationship have come to light during their trial.

The film journalist, Grace Randolph, tweeted earlier this month that Heard has "less than 10 minutes of screen time" in the new Aquaman film.

There is also a petition going around from Depp's fan group to remove Heard from the movie entirely. The petition currently has over 4 million signatures.

Heard's biggest mistake was assuming this trial wouldn't affect her career or personal life at all. 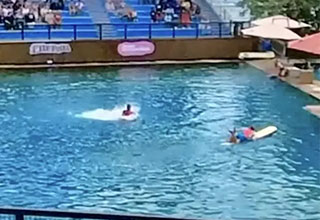