Beth Chapman, the wife of Dog the Bounty Hunter, died at a hospital in Honolulu, Hawaii, on Wednesday, June 26, following her two-year-long battle with throat and lung cancer. She was 51 years old and passed away around 5:30 am, the time she would normally get up and go hiking.

It’s 5:32 in Hawaii, this is the time she would wake up to go hike Koko Head mountain. Only today, she hiked the stairway to heaven. We all love you, Beth. See you on the other side.

Earlier in the week, Dog shared a lighthearted tweet from Beth's bedside at the hospital she was receiving treatment at.

You all know how she is about HER NAILS !! pic.twitter.com/w8iWMYrWZd

Beth died a few days after being placed in a medically-induced coma to begin the treatments she needed.  She had been battling throat and lung cancer for the past two years.

In September 2017, Beth was diagnosed with stage II throat cancer, but after a few months she revealed she was cancer-free.  Sadly, the disease returned in November 2018 and in the following months the cancer had spread to her lungs.

Check out some of the funniest and craziest moments from Dog the Bounty Hunter in the clip below.

Dog the Bounty Hunter even made it's way on to the immensely popular South Park, when Eric Cartman let the power of being a hall monitor go to his head. 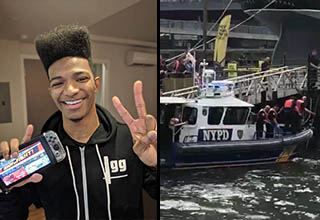