Boxing is a vicious sport by nature. Two men get into a ring and one man leaves victorious. But that doesn't mean boxers go into the ring with the intention to hurt their opponents beyond knocking them down. Which is why the death of Patrick Day is so damn sad.

As spectators we love to see a good bout and even better knock-outs, but this past weekends fight between Charles Conwell and Patrick Day has left a sad cloud over the sport.

Patrick Day was knocked-out in the 10th round and later slipped into a coma before having an emergency brain surgery. And four days later he died of his injuries.

Charles Conwell took to Instagram to address his death and made mention that he is considering if boxing is still right for him.

This is my last time speaking on the situation because of this being a sensitive topic not only for his family and friends but for myself and the sport of boxing. Dear Patrick Day, I never meant for this to happen to you. All I ever wanted to do was win. If I could take it all back I would no one deserves for this to happen to them. I replay the fight over and over in my head thinking what if this never happened and why did it happen to you. I can’t stop thinking about it myself I prayed for you so many times and shedded so many tears because I couldn’t even imagine how my family and friends would feel. I see you everywhere I go and all I hear is wonderful things about you. I thought about quitting boxing but I know that’s not what you would want I know that you were a fighter at heart so I decided not to but to fight and win a world title because that’s what you wanted and thats what I want so I’ll use you as motivation every day and make sure I always leave it all in the ring every time. #ChampPatrickDay With Compassion, Charles Conwell

Conwell was not the only person greatly affected by Day's death and shortly after the news broke many people expressed their sadness over the tragic event.

Patrick Day’s death has got me fucked up ,I followed him on Instagram and observed his training from the outside . Seemed like a genuinely great soul with an incredible spirit and outlook on life . His message leading up to his death was to live fully . I will Pat thank you

Our deepest condolences to the family, friends and the team of Patrick Day. Rest In Peace Pat. 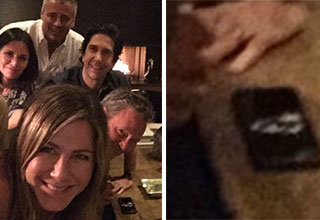 NEXT ARTICLE Jennifer Aniston Joins Instagram, Seems to Post Photo of Her Doing Cocaine With the Cast of Friends