The DOJ declared on Tuesday that they had arrested two individuals living in New York, Ilya Lichtenstein and Heather Morgan, after discovering they had stolen $4.5 billion in a cryptocurrency money laundering scheme during the 2016 hack on Bitfinex. This is recorded as the largest financial seizure ever by the department.

The hacker allegedly had been sending the couple bitcoin to a digital wallet since the 2016 incident occurred. Lichtenstein had supposedly laundered about 25,000 stolen bitcoins in the past five years and had been directing the money into his own accounts and his wife's.

ABCNews According to DOJ, the couple "employed numerous sophisticated laundering techniques," like setting up online accounts with fake identities, setting up programs that could make numerous auto-transactions in short periods of time, and depositing funds on darknet markets in order to cover up where the transactions began and where the money was sent.

The couple is not involved with the ongoing investigation of the hack itself, and this event is ruled as a separate occurrence. They have been charged with conspiracy to commit money laundering and conspiracy to defraud the U.S. Lichtenstein may face a 20-year sentence, while Morgan will receive a 5-year sentence.

Lichtenstein had been supplying his wife with an endless stream of stolen money for the past five years, so she decided this was a perfect time to get her music career off the ground.

Seems like the best way to get your rap career to go viral is to set up an elaborate bitcoin laundering scheme and get arrested for it. Maybe Morgan will finally understand the meaning of street cred during her 5 years in jail. 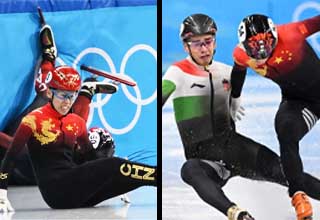 NEXT ARTICLE Chinese Speed Skater Blatantly Cheats at Olympics, Victims Get The Hammer Instead