A dramatic and unexpected scene unfolded at an Ohio courthouse when the defendant suddenly unexpectedly attacked his lawyer, a public defender.  The attack came as the judge was reading off the sentence to Chilston which included 45 years in prison, and registering as an arsonist with the state.

Chilston was standing trial for an incident from 2017 in which he reportedly pistol-whipped his girlfriend and threatened to kill her after she accused him of sexually abusing her 15-year-old daughter.

When police arrived at the scene, he set fire to the apartment complex and was involved in a standoff with deputies.

A Sheriff's Deputy accidentally cuffed the the 42-year-old defendant in the front instead of behind his back and inadvertently gave him the ability to throw a swing.

Brockler (the public defender)  had to be wheeled out of the courtroom by Cleveland EMTs and is said to have suffered a broken nose, a minor bite, and a possible concussion.

The unexpected and violent attack can be seen below:

Criminal defendant attacks his own attorney after getting 45 years in prison pic.twitter.com/QqWy8ADtrG 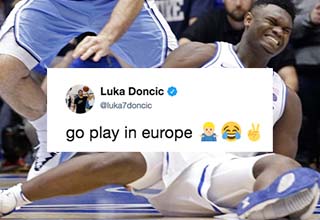 NEXT ARTICLE Zion's Shoe Exploded and So Did the Internet