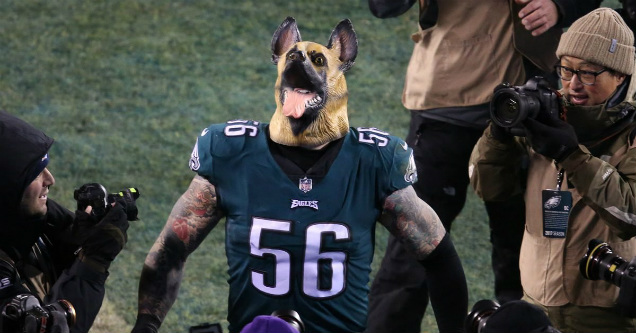 Fans of the Philadelphia eagles have long been known for hooliganism and even violence. And now, on the even of their biggest game of the season thus far, Eagles fans are buying masks in record numbers.

The trend was born last week when offensive tackle Lane Johnson busted out the mask on field after a major upset victory against the Atlanta Falcons.

His teammates were apparently not alarmed by the very disturbing man-dog that suddenly had appeared in their midst.

Eagles fans quickly took to Amazon. The online retailer sold out of masks by Monday.

Watching football can be nightmarish on its own, but with the addition of crowd shots of drunken, angry, rubber-faced dogs— it's going to be an acid trip from Hell.

The stadium has preemptively said "yes" to the masks, and "no" to the safety of unsuspecting Vikings fans.

Doggone it, you better believe dog masks will be allowed at @LFFStadium this weekend. Just make sure to take them off when you go through security.#FlyEaglesFly pic.twitter.com/0REb840ME7

Minnesotan fans headed to "The Linc" (Philadelphia's stadium) this weekend would be wise to constantly check their six for any wild Eagle dogs. We'll be happy watching the chaos from the comfort of our own couch. 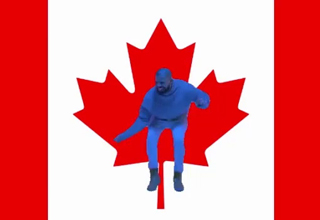 NEXT ARTICLE Why Canadians are Actually Assholes