Over the Christmas weekend, the city of Seattle experienced a catastrophic ice storm as heavy rain and flooding were immediately followed by freezing temperatures. The result was slippery chaos across the region, and an endless supply of entertaining videos deserving of the Benny Hill theme. Here are some of the best.

As part of the wave of severe cold weather ripping across the northern United States, this storm brought black ice, instead of white powder to the rainiest city in the United States. The national weather service is calling the storm "the most significant ice event in the region in at least a decade," and all busses were canceled for the first time since 1996.

King County Executive Dow Constantine urged people to stay at home, tweeting, “Please don’t go viral on TikTok trying to drive on the ice.” Quite a few people did the exact opposite.

Even the police got in on the accident causing action in nearby Oregon.

Traveling conditions were nearly impossible, even for those who decided to walk. This woman went viral for her vine grabbing technique, and a few dog walkers became dog crawlers.

Seattle people arent built for this

Who knew mountain climbing tools would come in handy for crawling up the road?

Even this poor guy’s phone succumbed to the force of gravity.

With 233 reported emergency calls for weather-related incidents, safety was a very real concern for people traveling after the storm. But some people, like this guy, realized that the best entertainment was the view right outside of their bedroom window. 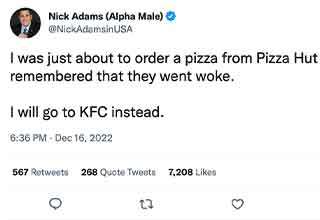 NEXT ARTICLE Alpha Males Go to KFC Instead of Pizza Hut, Even Though They're Owned By the Same People