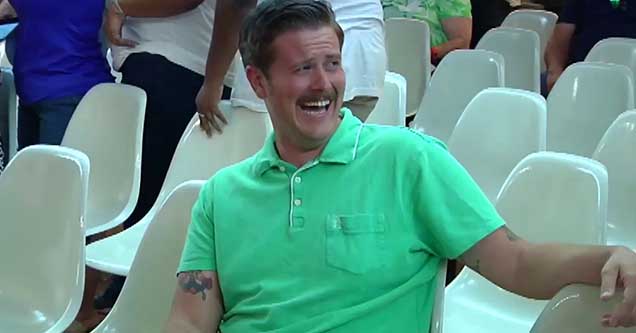 When people act stupid, sometimes you just have to laugh. That's exactly what one man did at a City Council meeting about sanctuary cities in Tuscon, Arizona where some anti-immigration protesters decided to disrupt the proceedings with their take on the issue.

The full video of the incident can be seen below:

The protesters are from the Arizona chapter of a far-right organization known as the Patriot Movement, a group which believes in some pretty extreme measures even by conservative standards. Patriot Movement AZ has been sued multipletimes by the Southern Poverty Law Center (alongside a coalition of local churches).

Dubbed #GreenShirtGuy by Twitter, the man in the video became an almost-instant viral sensation for his absolute nonchalance in what could have been a tense/awkward situation.

This. Gives. Me. LIFE!#GreenShirtGuy is every one with a brain.

“You are in direct violation of being a jackass" may be my new favorite sentence.
pic.twitter.com/qcHKcLBZPz

The fact that #GreenShirtGuy is No.1 trending gives me hope for humanity. pic.twitter.com/aGegKw19pi

Do I have to make a choice between #GreenShirtGuy and #PlaidShirtGuy? Or can I like them both? Decisions, decisions. pic.twitter.com/aLefkaNvkK

Thank you #GreenShirtGuy for being ALL OF US. We needed this. pic.twitter.com/dGHDcyz74M

How does #TucsonCityCouncil deal with racists? Laugh them out. This was one of the best ones I've seen. #GreenShirtGuy just broke the internet and I'm weak! Thanks Alex for making my day! https://t.co/nShckcep0t

#GreenShirtGuy should be the only person allowed to report on every Trump rally and press conference. pic.twitter.com/PohBXAzLhX

I missed this episode of Parks and Rec. #GreenShirtGuy

Eventually, our green-shirted hero was identified as a local comedian and writer named Alex Kack.

#GreenShirtGuy is @Alex_Kack. And I love him. I love you @Alex_Kack. Please promise me you will befriend Banjo Man, walk the earth together, and get into adventures. https://t.co/nQMLdcwsAS

You bring our country joy #GreenShirtGuy ! Thank you, sir! pic.twitter.com/32tnip4ncg

Alex was rightfully amused by his newfound viral fame, but quickly took the opportunity to point all those eyes toward a worthy cause:

In all seriousness they were there to protest Tucson's citizen lead Sanctuary Intiative which is under attack by the local GOP, you can help at: https://t.co/iOCDLN5mGd. #defendsanctuary #GreenShirtGuy 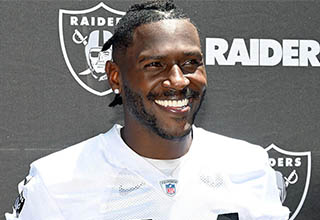