Diego Sanchez, the longest-active UFC fighter in history, has always been a weird guy, but his latest exploits have the entire UFC roster and wider MMA community legitimately worried about him.

Sanchez, 39, is the original ultimate fighter, winner of the first season of the eponymous The Ultimate Fighter reality show that helped make the UFC mainstream and had virtually guaranteed him a place in the UFC Hall of Fame.

He’s the last person you would think of as vulnerable. Sanchez has spent close to twenty years fighting other men barefoot inside of a literal cage, clad only in his underwear and a pair of 4oz gloves. He can separate you from your consciousness in a variety of ways.

Yet he’s being preyed upon by a guru -- his “guru” who has him hanging upside down in what looks like some infernal ritual chamber while using him as a literal human punching bag. That's the what -- but even more interesting is the why.

Sanchez has fought for the UFC an astounding thirty-two times over the past sixteen years -- more than anyone else besides a small handful of fighters. He’s always been a fan-favorite, a company man, and a more-than-game fighter ready to take on all comers. His legendary back-and-forth clash with a fellow UFC vet, Clay Guida, stands in the Fights section of the UFC Hall of Fame.

Everybody loves Diego. But perhaps nobody more so than Joshua Fabia. 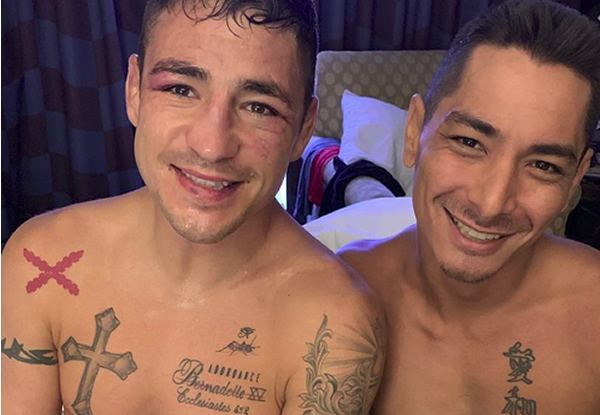 Whether Sanchez is claiming to be from another dimension, capable of siphoning the energy out of thunderstorms or championing the miraculous healing powers of stevia, his trademark weirdness is part and parcel of being Diego Sanchez. Indeed, things like his inimitable walkouts and saliently murderous intensity coupled with a willingness to pull back the curtain and give us a peek at the inner workings of his mind are what endeared him to fans as much, if not more than, his performances inside the octagon.

But last year, the strangeness ramped up.

At almost 40 years old, the lightweight-turned-welterweight was already reaching the end of his long and arduous career. Many know that happy endings are all too rare in combat sports; rarely does a fighter choose to stop at the apex of their career and as time wears on, the flesh grows less and less willing than the spirit. You expect to see a few losses towards the end, signifying the time to hang it up has come.

And, as people began to wonder where this behavior, bizarre even by Diego’s standards, was coming from, all eyes were quick to fall on Diego’s new coach, one-man corner and “School of Self Awareness” founder, Joshua Fabia.

Fabia first entered the public consciousness in mid-2019 when Diego left the famed Jackson Wink MMA, his longtime Albaquerqe gym that he shared with fellow UFC greats Holly Holme, Donald Cerrone and Jon Jones and installed Fabia as his only trainer. This move raised many an eyebrow, considering Fabia had approximately zero real coaching experience, no MMA experience of his own, and taught a rather bizarre combat system that seemed more suited for chasing disqualifications and sexual harassment lawsuits than championship gold.

Fabia took Diego under his tutelage, becoming his “coach, trainer, manager, physical therapist and nutritionist” at his School of Self Awareness, where he sells classes on something like holistic wellness. Fabia pitches his $999 Master Class and the “SoS Method” as a way to cure everything from social anxiety and epilepsy to pure, unadulterated existential angst. 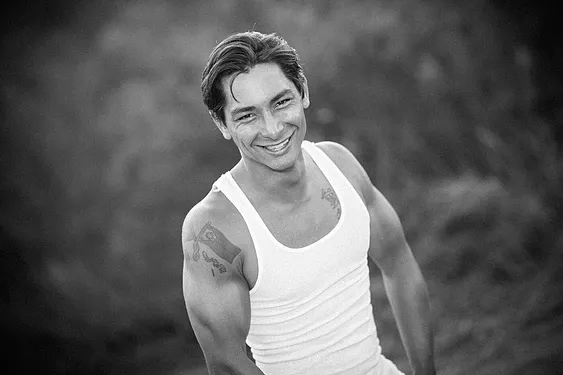 The Founder page on the school’s website provides a bio for Fabia, stating that “His journey as a healer and guide began at just nine years old when his grandfather suffered from a heart attack and a ruptured brain aneurysm that resulted in the same effects as a stroke. Observing the Western approach to physical therapy and driven by the desire to help, Joshua fell into the role of physical therapist for his grandfather and worked with him to a remarkable 85% full recovery.” Something for which there is little credible evidence.

It goes on to make Fabia out like a character from Conan the Barbarian, adding that he has “extensive experience in defense, protection, human rights, and physical therapy.” and that he has sought out “experiential wisdom from elders and wise leaders all over the world. From them, in the depths of forests, jungles and deserts, he learned ancient, universal concepts…” Getting any handle on what any of these ‘concepts’ might entail without first coughing up the thousand-plus dollar pricetag is seemingly impossible.

Other than the fact that it occasionally involves chasing people around an Octagon with an actual knife.

Without even considering the Joshua Fabia knife video, the SoS method seems like an amalgamation of knockoff-Krav Maga, Yoga, and Crossfit if you drenched it in a bit of Deepak Chopra and overlaid it with a veneer of the Calm meditation app.

It's like Fabia took a stroll through the discount philosophy and a martial Arts aisles of a 90s VHS store, throwing everything into his cart his twelve-year-old self thought was cool and stitching it all together in a loosely connected patchwork. And this man’s teaching Diego Sanchez, a lifetime UFC veteran with over a decade and a half of fighting some of the best fighters in the world, how to fight.

And, surprisingly, it isn’t working.

Right before Diego’s first fight under the “tutelage” of Joshua Fabia and the SoS Method, Diego gave an extraordinarily bizarre interview (again, even by Diego’s standards) that, in hindsight, seems full of the same quasi-spiritual ambiguity that defines Fabia’s own sales copy.

Under Fabia’s tutelage, Diego went on to lost two of his last three fights, with the one win coming from a disqualification stemming from a mistake his opponent made while, frankly, beating his ass, and without which would've been a third loss. 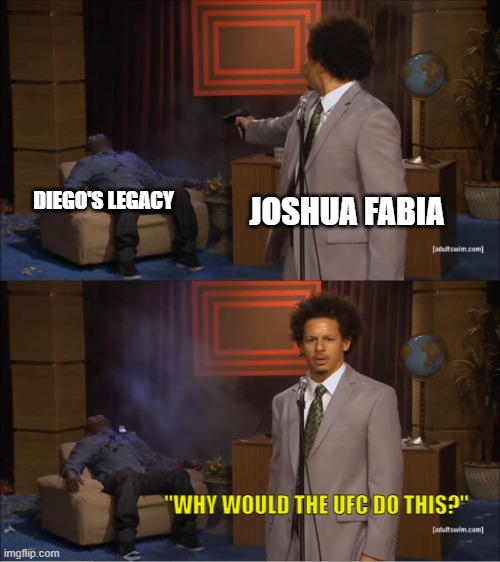 And as the MMA media began encircling Fabia like a pack of angry hyenas, Fabia seemed to enjoy the spotlight while simultaneously loathing his portrayal in the media, which he deems biased and defamatory. He began to lash out against well-known figures in the sport both online and in person.

Everything came to a head a couple of weeks ago when Fabia crashed the pre-fight media meeting that serves as a routine part of any UFC events promotion. Usually, the fighters are brought in to sit down and answer questions from the broadcasting team, some press, and other UFC personnel ahead of their upcoming fight. It was here that the founder of the School of Self-Awareness chose to display demonstrably little of said awareness.

Shortly after that, the longest uninterrupted tenure with the UFC came to an abrupt end when Sanchez was promptly cut from the UFC. Soon after, Sanchez began to defend him more vigorously while growing more and more paranoid. He began to claim that the UFC might be out to get him, insinuating his life was in danger and that he might be killed to keep him from talking about any skeletons in the UFC’s closet.

In the wake of the 'disturbing' Diego Sanchez and Joshua Fabia training video and Diego's unflattering performances inside the cage, both fighters and figures of the sport began to speak out against Fabia, urging Sanchez to ditch his guru; Sanchez nonetheless remains both Joshua Fabia’s star-disciple and staunchest defender -- even disowning family members to stay “loyal” to Fabia.

It leads many to wonder: What is Fabia getting out of his stewardship of Sanchez?

Aside from the spotlight and distinction of being the “mentor” of a UFC veteran and only Diego Sanchez coach? Money. Not only is Sanchez himself a highly-paid athlete (much more so than most UFC athletes), earning sometimes hundreds of thousands of dollars for a single fight, his presence at the School of Self-Awareness also legitimizes the institution in the eyes of many onlookers.

A quick stroll through the Upcoming Events section of the SoS website shows that Sanchez is a regular fixture of traveling seminars conducted by Fabia, who charges hundreds and sometimes thousands of dollars for his courses. His partnership with Sanchez brings more attention to him and his school, pushing his brand out there with more fervor than any paid ad-spend could net him.

After all, they say there’s no such thing as bad publicity for a reason and with three appearances on huge pay-per-view events and the currently ensuing ruckus in the media he’s generated for himself, Fabia is certain to be turning a tidier profit than he ever did before his association with Sanchez.

But what is Sanchez getting out of it? 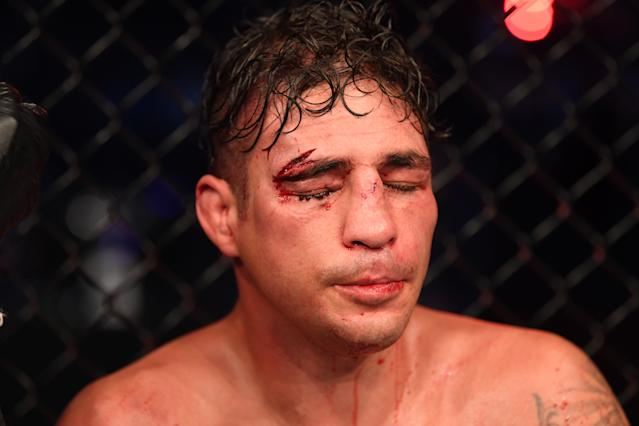 And the validation that had grown increasingly elusive for Sanchez as he reached the tail-end of his career. In mid-2019, right around the time he connected with Fabia, Sanchez’s life virtually fell apart. He and his now ex-wife separated and he soon after staged a contentious exit from Jackson Wink MMA.

Sanchez has since told reporters that their marriage had strained under her increasing insistence that he retire from the sport on the basis of his physical and cognitive health. At the same time, he began to complain of a lack of attention from his longtime gym and coaches, lamenting the fact that his longtime coaches seemed to reserve the bulk of their attention for bigger stars and more promising prospects than himself.

In other words, Sanchez’s support system had crumbled right under his feet. A fighter who knew nothing but fighting had no one there ready to cheer him on any longer -- even if their reservations stemmed from genuine concern for his well-being.

Except for Joshua Fabia. Armed with “ancient, experiential wisdom'' procured from the secretive elders of some clandestine land, Fabia was there to encourage him to continue fighting and give him the undivided attention he craved. At a time when nobody else seemed to want him, Joshua Fabia was ready and willing to give him the license to do whatever he wanted to do -- but perhaps shouldn’t, any longer.

Sanchez's story should serve as a cautionary tale, a reminder that predators come in many forms and no one, not even a hardened, professional fighter is immune to exactly what they want to hear. 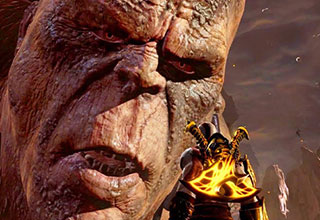