Here's a scenario for you: You see a Facebook post in a political group that says that FoxNews lost 73,000,000 viewers over the last two days. This is a statement that if true would make a lot of angered republicans a little bit happier during a time where many are making their way through the five stages of grief.

What would you do? Do you immediately take this statement as fact? Many would, and many do and did. But you'd think and hope that if someone showed you proof that this statement had been completely fabricated everyone would change their tune and un-share the post.

I'm here to show you that this is simply not the case.

I present to you the original source of this claim, which was tweeted just two days from the time I am writing this piece. No, our friend @InGodIDoTrust didn't get this from another source, he tweeted it himself. He blatantly made it up and spread it to his 30k likeminded and retweet happy followers.

Well, maybe he's joking and everyone is just laughing along. Could be possib- oh nevermind that, we're in deep shit. 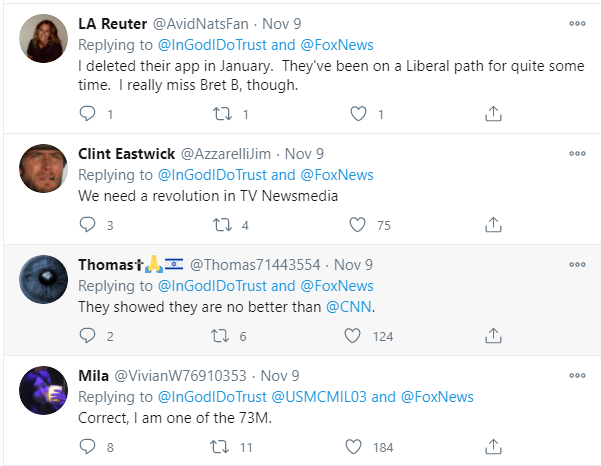 The damage has been done. And when asked for his source on this claim, he replied with a screenshot of FoxNews being blocked on Twitter with the caption "Paul Ryan". 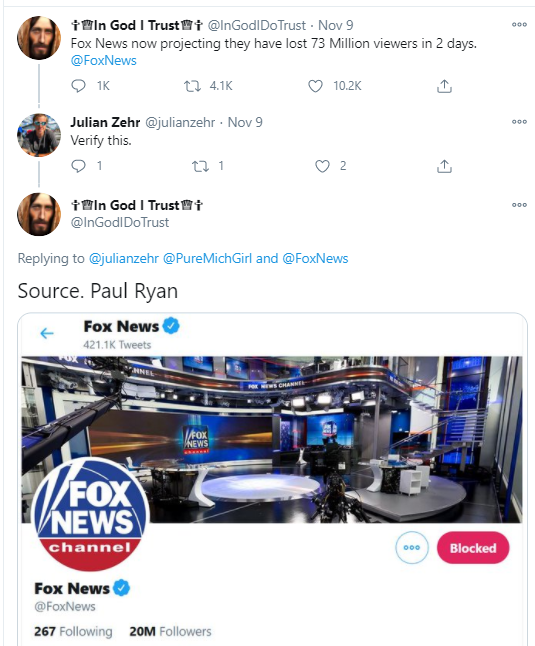 Well, okay maybe if this just stays on Twitter it won't have an impact - oh who am I kidding. I wouldn't be here writing an article if that was the case. 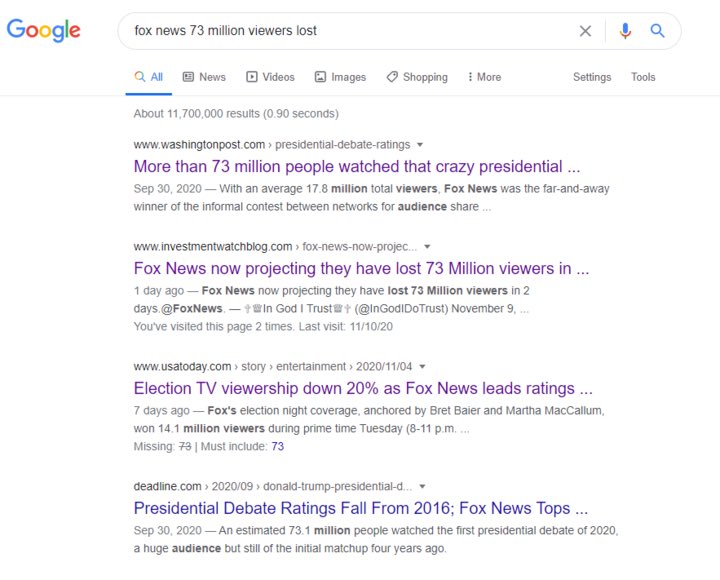 Upon searching for different combinations of the claim, there appears to be one hit on Google. And yup, you guessed it. It's our old pal In God I Trust again, embedded in an InvestmentWatchDog page with no other text.

What's also of note is that the 73 million number does appear, but it's for the presidential debate, which broke a record. This is likely where the claim originated. 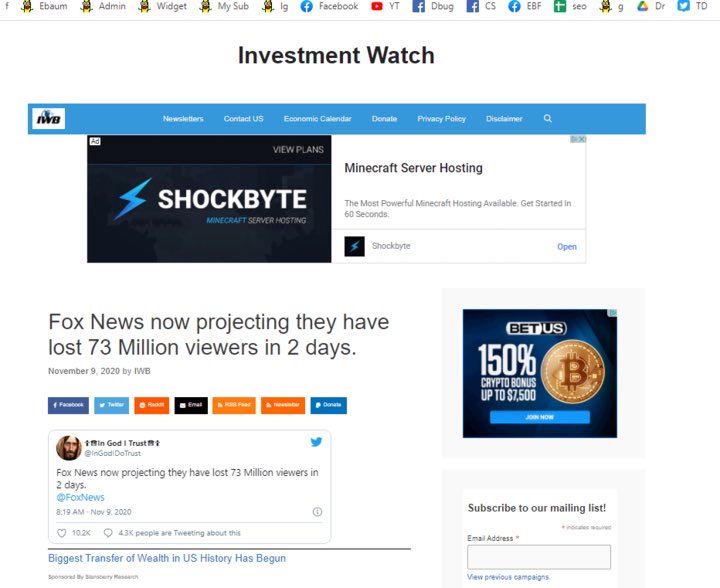 Well, okay maybe this website is a reliable source. Narrator: It wasn't. 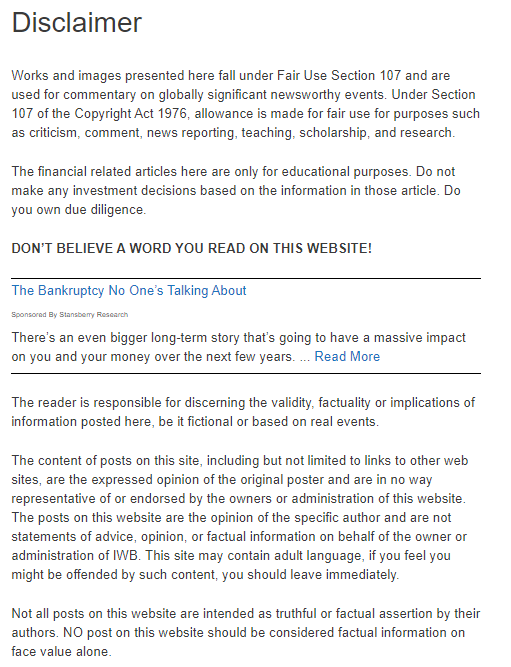 I don't know about you guys but when a website tells me, "DON'T BELIEVE A WORD YOU READ ON THIS WEBSITE!" I feel like that's a pretty clear indicator that anything it publishes isn't reliable information.

But the truth doesn't matter to many in political social media. Finding information that aligns with your current views is of much more importance. 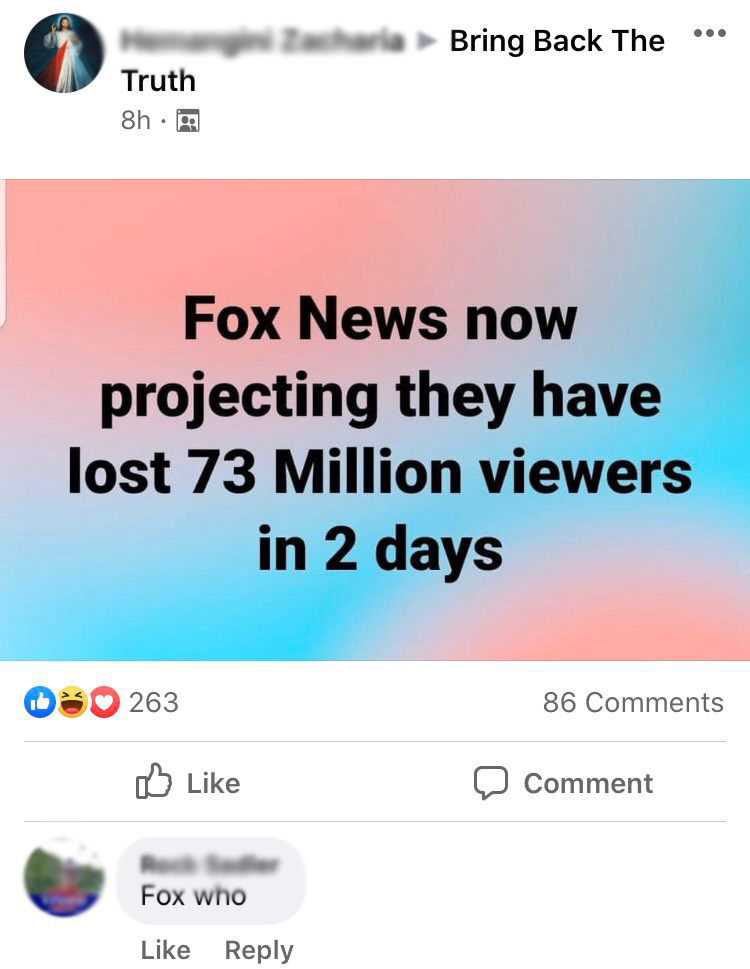 Upon investigating the person who posted this, it's possible since both have religious profiles that they are the same person.

This Twitter account bio claims they were retweeted by the president at some point. A Twitter advanced search reveals this to be false. That didn't stop them from plastering the false 73M claim on a long but unrelated NewsMax clip that doesn't mention FoxNews once. And getting over 100k views. It's unlikely that most people watched the whole 2 minutes before retweeting.

Fox News now projecting that they have lost 73 Million viewers in 2 days...

Retweet if you love #Newsmax pic.twitter.com/ynqkphMLRS

More of the same can be found on FB. 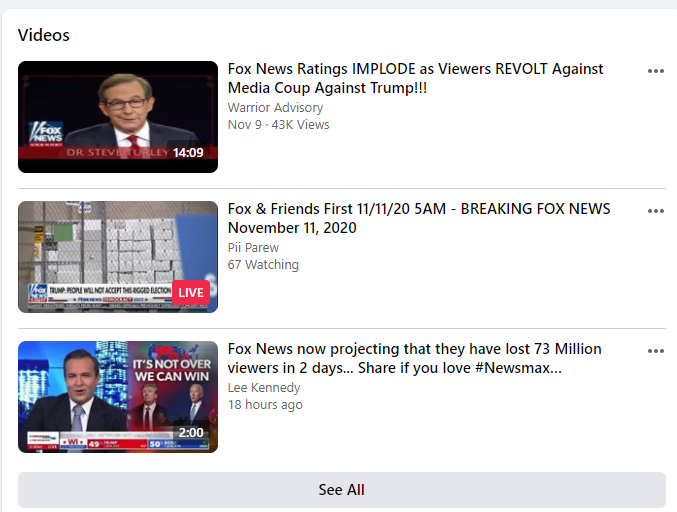 Well, I couldn't stand around and let everyone believe this fake information. So I created a Twitter thread that explains how the misinformation spread in a simple way to understand.

How the false "Fox News now projecting they have lost 73 million viewers in 2 days" claim got spread around the internet in 1 day, a thread: pic.twitter.com/L1kYCPlKtP

I then linked this thread in many Trump FB groups who posted this and was met with intense criticism. 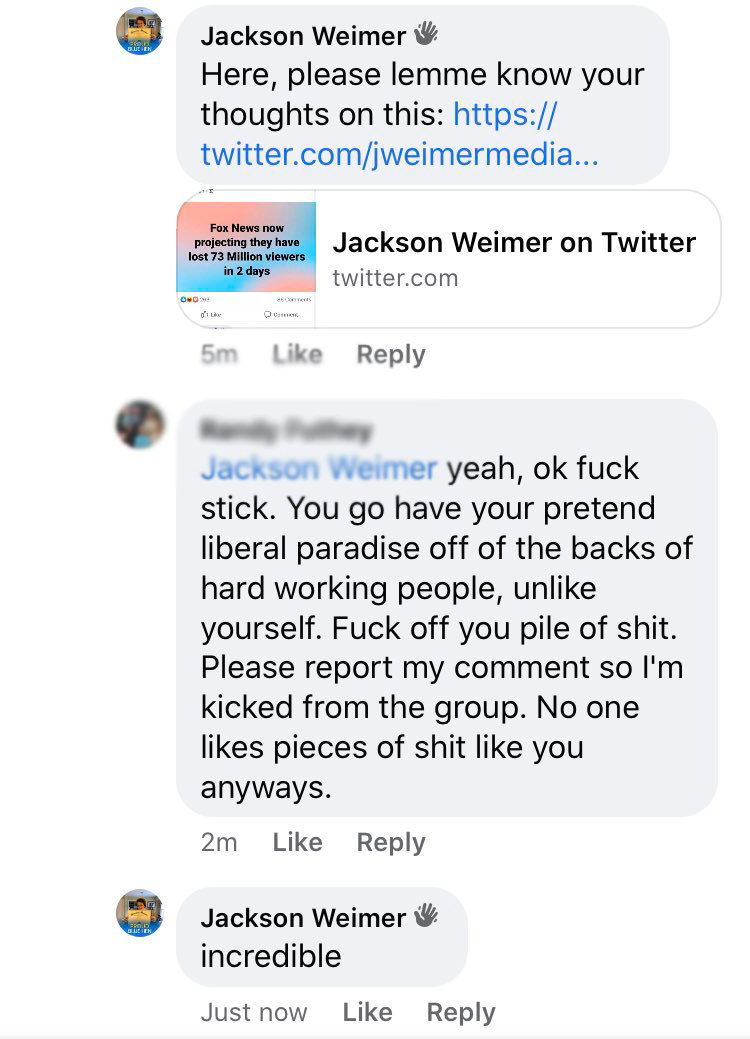 It just took one person to say that FoxNews lost 73,000,000 viewers - half the amount of people who voted - and many people in multiple Facebook group believed it, without thinking to double-check it. THIS IS DANGEROUS!

That's pretty much how this story ends, for now. I'm sorry that I don't have a happy ending where everyone realized their error and corrected their ways. That's just not how we operate online. The truth doesn't win on social media. Clicks and shock do.

I see a lot of similarities between the way passionate sports fans and politically active people behave. We are programmed to hate someone in this country if they are on the other team. Just like Yankees vs. Red Sox, Democrats vs Republicans is an intense and dangerous rivalry that's only getting worse with social media.

I don't have a solution. I just make memes. If you read this far, all I ask of you to do is to double-check something before you share. Like crossing the street, you gotta look both ways! 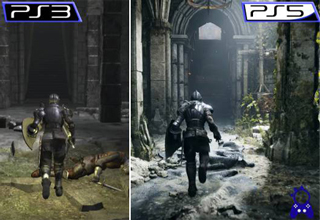 NEXT ARTICLE Does the 'Demon's Souls' PS5 Remake Hold up to the Original?