The heat is rising for the artist Grimes and the notorious leaker Chelsea Manning as the two have been sharing revealing Twitter posts about their new relationship.

A former US soldier, Manning is known for leaking classified government documents onto Wikileaks in 2010 and was sentenced to 35 years in military prison after being found guilty on over 20 charges. However, in January of 2017, President Barack Obama commuted her remaining prison time after serving 7 years.

In December Grimes tweeted, "Celebrity culture is suffocating af. I’m not quitting music, but def changing my main day job after BOOK 1. Music industry feels old and tired, reliant on archaic systems." Manning replied to Grimes' Tweet with one word, "Vouch" to which Grimes responded, "Since I seem to be taking ur word as final these days."

Manning also went on a spree of liking multiple Tweets about Grimes, including a cover story that was running about the singer in Vanity Fair, which revealed Grimes and Elon Musk were welcoming another child via surrogate named Exa Dark Sideræl, a girl, in December.

What next, Queen Elizabeth leaves Prince Phillip for Cardi B?

Musk and Grimes had reported being in an open and fluid relationship, but have since decided to end things altogether.

Looks like Grimes has a habit of surrounding herself with popular controversial figures. Let's hope there's a room on Mars for the whole family. 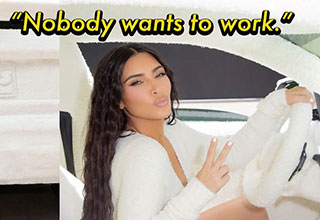