'Iranian Woman' trended on Twitter after this gorgeous World Cup fan was briefly pictured during the broadcast of the critical match between Iran and the United States. In just a few seconds of air time, the woman captured the hearts of millions watching around the world, including this American fan who offered up a green card over Twitter.

If anybody knows this girl and she’s looking for a green card to escape the tyranny of Iran, my DMs are open. pic.twitter.com/kC8y6mpElJ

As she popped up I knew millions of Americans were all thinking the same thing.

Iran is currently in the middle of widespread protests sparked by the death of a 22-year-old Kurdish-Iranian woman named Mahsa Amini, who was killed by authorities after being detained for the improper wearing of a hijab. Authorities have not been shy in their use of violence to try and quell the uprisings, and death tolls are high. The cause of freedom for Iranian women has struck a nerve around the world, especially among younger generations, and even the Iranian national team refused to sing their anthem in solidarity with Iranian women and the protests.

With this context in mind, many people were upset with the tweet for its objectification while Iranian women are fighting for their rights.

Can you not turn a women's revolution into an occasion for you to find a mommy bangmaid from overseas? Exhausting.

The Persian women that you are leering at would likely ignore such an obviously sexist hot take. The ones that I know are highly educated, intelligent, and strong feminists who wouldn't give a putz whose only interest is superficial the time of day. Sad.

Of course, many others expressed their agreement with its general sentiment.

I was watching the game with my dad in his sixties, when the camera cut to her his only words were “there’s some pretty girls in Iran” only words he said the entire match

People also turned their attention to the man standing in front of her, wondering if they were together, and noticing a doppelgänger.

He comes with. And anything you do to her he does to you pic.twitter.com/OsROtn1wGq

Missed it, I thought they were panning over to Gilbert Gottfried pic.twitter.com/p3jKpz4Emt

Following Iran's defeat to the United States, there is still a feeling of tension surrounding its national team. The regime allegedly threatened players' families after their national anthem protest, and authorities shot and killed a man for celebrating the American victory. Civil unrest is still ongoing with no signs of slowing down, and the death toll could be higher than 500.

Hopefully Iranian protestors can take some solace in the fact that the bulk of the world is behind them, and this viral world cup fan can only help in garnering support for Iranian woman. At least she did for this fan.

How can anyone not support the Iranian women now. Free those faces 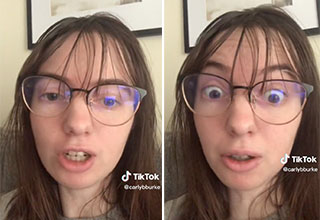