Lizzo, the iconic rapper and professional flutist made history yesterday. Earlier this year, she embarked on her tour, appropriately named “Lizzo: The Special Tour”. No one knew just how special it could be until The Library of Congress reached out. Carla Hayden, the Librarian of Congress reached out on Twitter a few days ago, offering Lizzo toots on flutes from the largest flute collection in the world.

NOBODY HAS EVER HEARD THIS FAMOUS CRYSTAL FLUTE BEFORE

IM THE FIRST & ONLY PERSON TO EVER PLAY THIS PRESIDENTIAL 200-YEAR-OLD CRYSTAL FLUTE— THANK YOU @librarycongress ❤️ pic.twitter.com/VgXjpC49sO

This collection includes James Madison’s crystal flute from 1817. Shrouded in mystery and history, it was a gift from a French crystal worker. Also apparently the only survivor of a horrific fire, aside from a painting of George Washington. Madison never played the flute, and neither did anyone else. This is probably because they all knew the truth. There was a more worthy musician waiting for it in the future. We’re lucky enough to witness that prophesied musician today. We’re lucky enough to witness… Lizzo. 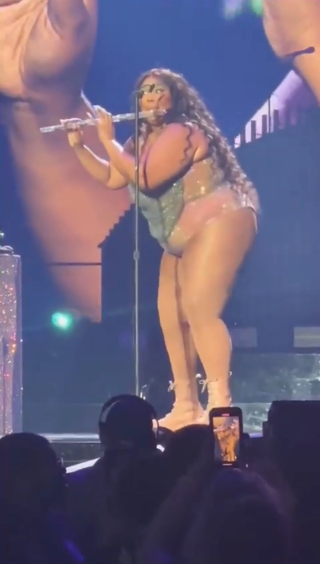 The glass flute was escorted by DC Police to the concert. Turns out the policies' dedication to protecting white dudes now extends to their obscure collectibles. With the historic escort, the Queen is now the second most important antique to be protected through streets by government officials this week.

Sometimes, something so amazing happens, it’s hard to believe it’s real. @Jacob_deNobel compared it to a Clickhole article. And thank god it isn’t.

If you didn’t know that was a Lizzo lyric this would read identically to a Clickhole tweet https://t.co/O0f9nieMMy

White people freaking out over Lizzo playing a slaver’s flute is my favorite Twitter right now.