We have all been lost at one point in our lives, and most of us have probably stopped to ask someone for directions. However, most of us were not greeted by a shirtless shotgun wielding man who shoots first and asks questions later.

For 14 year old high school student Brennan Walker this terrifying scenario became a reality. One morning after missing the bus and having to walk to school, Brennan found himself lost, without his cell phone, and in need of directions.

Brennan stopped at a random house and rang to the doorbell to ask for directions.  Shortly after Brennan is seen running away as a shirtless man holding a shotgun emerges, takes aim, and fires a shot at the teen who's literally running for his life.

The homeowner (Jeffrey Zeigler), was charged with assault with intent to murder, which could lead to life in prison.  Zeigler was also charged with use of a firearm in a felony.

Zeigler claimed that he accidentally fired the shotgun after slipping, but the video shows Zeigler pausing for a second before aiming and then firing the gun.

Zeigler’s attorney was quoted saying that "race was not a factor in the shooting, and that his client and his wife were on “high alert” after five previous break-ins at their home". Zeigler “acted from passion instead of judgment,” Morad told jurors.

Brennan testified in court on Monday that Zeigler’s wife answered the door and immediately accused him of trying to break into the home.

Zeigler’s wife yelled for her husband, and Jeffrey sprang out of bed, armed himself with a shotgun and ran out to the porch.

Brennan was nearly out of the yard when Zeigler appeared shirtless, shouldered his shotgun and leveled the barrel in the teenager’s direction.

Zeigler fired a single shot and no injuries were reported.  Here is part of an interview with the Brennan, the 14 year old student from Detroit's WXYZ-TV Channel 7 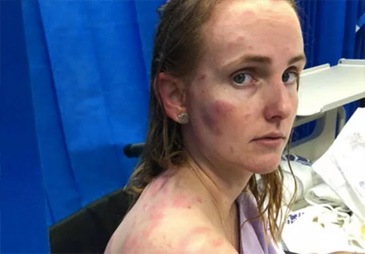