In one of It’s Always Sunny in Philadelphia‘s best episodes, titled “The World Series Defense,” the gang recalls what they did when the Phillies won the World Series back in 2008. Sweet Dee had planned to run on the field, and Mac wanted her to deliver a letter he wrote to Chase Utley.

Well Mac's dream finally came true Friday evening, a very special Friday night as it was during the ceremony for Chase Utley’s jersey retirement. As with any ceremony there were a lot of special moments, but the highlight for many fans was that Mac finally got to “have a catch” with Chase Utley. It's no secret to fans of the show what Utley means to co-creator Rob McElhenney’s character, Mac. 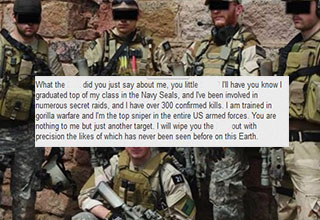 NEXT ARTICLE Navy Seal Copypasta For All The Internet Tough Guys