The coronavirus pandemic has produced all kinds of unlikely heroes, and this week a fetish website joined that list.

The British company MedFet, which describes itself as the "only online store 100% dedicated to medical fetish, kink, and roleplay," donated medical scrubs to a hospital to help its staff protect themselves from the virus while treating an influx of patients.

People at the publicly funded hospital contacted MedFet to ask if they had extra medical supplies to spare, since the UK government had not provided them with either enough funding or materials to cope on their own.

It's unclear who exactly from the hospital reached out (and how they knew about the fetish site in the first place) but MedFet said staff were "desperate" for help.

Today we donated our entire stock of disposable scrubs to an NHS hospital. It was just a few sets, because we don't carry large stocks, but they were desperate, so we sent them free of charge.
We don't usually do politics on Twitter, but here's a short thread. [1/5] pic.twitter.com/Z4ygmGr99M

MedFet was happy to send the hospital all their disposable scrubs for free, although they only had a few sets in stock. On Twitter, the company wasn't shy about bashing their government for allowing hospitals to go underfunded and under-resourced, especially when government officials had been claiming hospitals were fine.

"When you see someone from the government saying the NHS is getting what it needs, that is a LIE," they wrote.

"When we, a tiny company set up to serve a small section of the kink community, find ourselves being sought out as a last-resort supplier to our National Health Service in a time of crisis, something is seriously wrong."

Communities everywhere are responding to these kinds of fundamental supply shortages by making masks out of things like vacuum filters and baseball uniforms. But MedFet's contribution is definitely unexpected.

When it's not responding to devastating viral outbreaks, MedFet is providing kink enthusiasts with things like catheters, skin staplers, and proctoscopes (yes, they go up your butt).

While we wait to see which fetish retailers will be next to step up in this time of need, it's comforting to know our doctors haven't had to resort to "sexy nurse" costumes...yet. 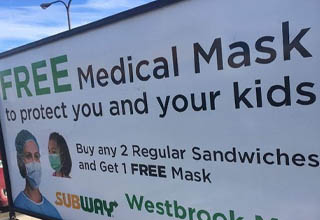 NEXT ARTICLE Subway Location Under Fire For Tasteless Promotional Deal