Earlier this week it was announced that Elon Musk had twins with a Neurolink exec, Shivon Zilis, back in 2021, which brings Musk up to a total of nine children. Before any of this was disclosed to the public, Musk had tweeted about the falling birth rate and his concern that the US is not doing its part to keep the rate steady.

Thousands of people noticed this including America's Got Talent host Nick Cannon who responded "Right there with you my Brother!" Nick Cannon is also a father to multiple children with five different women. 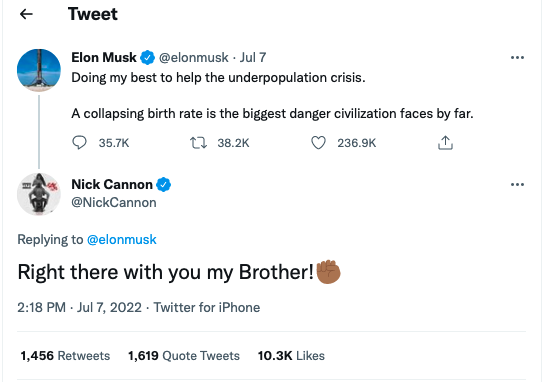 Musk's children have come from three separate women. His first child with Justine Wilson died of SIDS back in 2002. They then had twins in 2004 and triplets in 2006. However, one of those children has previously disowned their father and has decided to drop the Musk name. He then had two children with the singer Grimes in 2020 and 2021. This brings Musk's child count up to eight excluding the daughter that disowned him.

Cannon, who boasts eight children of his own, had twins with Mariah Carey in 2011, two children with Model Brittany Bell in 2017 and 2020, and in 2021 another set of twins with DJ Abbey De La Rosa. In 2021 it was announced he would have another son with Alyssa Scott, but unfortunately, Zen Cannon died of brain cancer at five months.

At the beginning of this year, Cannon announced he would be having a child with Bre Tiesi, however, there are rumors that he is due to have yet another child with Abbey De La Rosa around the same time in October.

Musk later continued his argument about underpopulation by posting a graph of the birth rate, saying we're in a "fertility slump" in the US. He followed up with a comment saying, "Contrary to what many think, the richer someone is, the fewer kids they have. I am a rare exception. Most people I know have zero or one kid."

USA birth rate has been below min sustainable levels for ~50 years pic.twitter.com/v5PSLbvEAE

Contrary to what many think, the richer someone is, the fewer kids they have.

I am a rare exception. Most people I know have zero or one kid.

When asked about overpopulation Musk replied to one user saying, "Far too many people are under the illusion that Earth is overpopulated, even though birth rate trends are so obviously headed to population collapse."

Some did not take kindly to Musk's take on the population size. Author Meena Harris replied to Musk's remarks by comparing them to the Supreme Court and saying "Musk+Supreme Court - Telling me it's my job to procreate."

telling me it’s my job to procreate https://t.co/NWn8llyO5D

It's easy for Musk to have eight or nine children with multiple women and support them on the richest man in the world's salary, but some of us out here are just trying to get a full tank of gas for less than five dollars a gallon! 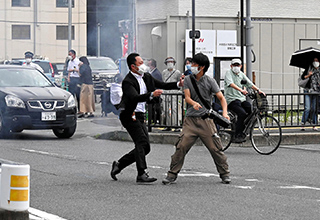 NEXT ARTICLE Ex-Prime Minister of Japan Assassinated With Homemade Gun