The Northman movie marketing department did a fantastic job creating their new poster for the New York City Subway. It makes sense since the poster will undoubtedly be seen by millions of daily commuters. The poster effortlessly conveys a feeling of action and drama through the faces and costumes of iconic actors like Robert Eggers and Nicole Kidman. With a job well done the poster was posted on the subway platform for all to see and admire, sure to help bring in audiences for the prominently displayed April 22 release date for... wait which movie again?

lol they forgot to print the title on the subway ads for The Northman pic.twitter.com/laMA3Juc3w

Except for some reason, they forgot that nagging little detail of a title. Not to worry, Twitter was there to pick up the slack and help out, with people editing in what they thought the title should be. All in all, with the poster now all over Twitter, perhaps this is exactly what The Northman marketing department was hoping for.

The studio would like to thank Robert Eggers for all his hard work. He also played every single extra and was the plot twist surprise guest, he also handled lighting and special effects single handedly pic.twitter.com/FHn21W0n1Z

Literally writes itself! Best thing on the net today. pic.twitter.com/BIe5sRScyA

OMG this is too much fun! pic.twitter.com/Ptp8nOMcuQ

wow I can't believe this subway ad for The Northman! pic.twitter.com/9XIANDHGvh 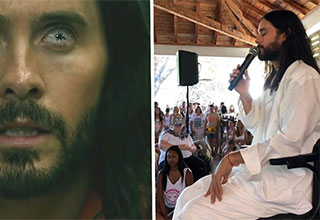 NEXT ARTICLE The World Has Had Enough of Jared Leto