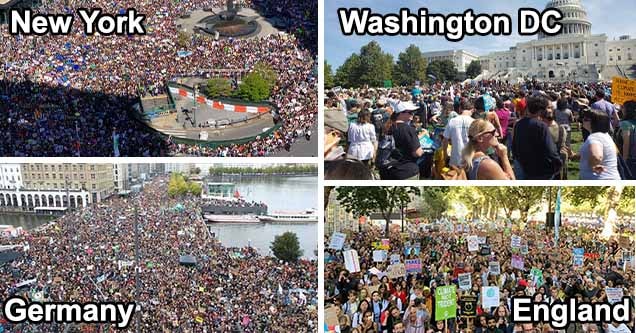 As an assortment of weebs and Kyles descend upon Nevada for the raid on Area 51, it's important not to lose sight of a much bigger, more serious gathering happening around the planet today: the #ClimateStrike. Thousands upon thousands of peaceful protesters are marching through the streets of their respective cities in an effort to get more political action towards what is arguably the greatest crisis of our time, and it's genuinely inspiring to see.

The Climate Strike is the brainchild of 16-year-old Swedish activist, Greta Thunberg, who first caught the world's attention after staging a sit-in in front of the Swedish Parliament. Since then, she's become the face of the movement, speaking with poise and eloquence while simultaneously not holding back on the urgency of the matter:

Today, millions of people are participating in the Global #ClimateStrike to demand an end to the age of fossil fuels. The youth-led movement is spearheaded by 16-year-old activist @GretaThunberg.

Greta's words have inspired thousands of people worldwide to demand action from their leaders, which culminated in today's global climate strike by students (and grownups) all around the globe.

Watch as London climate strikers decide to sit down in the road and occupy Lambeth Bridge!#ClimateStrike pic.twitter.com/YMV4S02z6n

“Y’all bout to go extinct like me.” More signs from Austin’s #ClimateStrike, where dozens of students have walked out of school to protest. pic.twitter.com/Ve2MsnX77Q

It goes out in November. But this feels like the right moment to share these drone shots we took today of the #ClimateStrike in Dublin pic.twitter.com/rIgmSDFwIe

Huge #ClimateStrike crowd gathering in Foley Sq to march downtown to the Battery! The scene from our Municipal Bldg office... @ClimateCrisis pic.twitter.com/ODoOno1A7Q

If you encounter any climate deniers at the #ClimateStrike, tell them:

-The science is undeniable

-Other countries are leaving us in the coal dust

-Climate devastation will stifle the economy

-Inaction is based entirely on Big Oil campaign cash pic.twitter.com/9v9lnXbk3q

Young people are standing up & standing strong around the world because the world we live in is under assault right now. Climate change isn’t a distant threat & this fight isn’t just for generations to come. It’s for today. It’s the urgency of now. #ClimateStrike

Thousands of #Brooklyn kids are marching now across the #BrooklynBridge to join Manhattan #ClimateStrike kids for massive #ClimateChange action. The entire 1.5 mile span of the Bridge is filled with children! pic.twitter.com/xhS2ZIha1D

Seriously this was special. We played “the 1975” by the 1975 which is a speech by Greta Thunberg with a backing track. Many people were crying. We’ve never seen anything like this in Glasgow before with so many people.#ClimateStrike pic.twitter.com/ZyMUbHRugP

Two biggest gatherings in the world today was #Area51storm and #ClimateStrike so this is our generation and yes we are hella proud of it pic.twitter.com/wAmPl4Q0GL

Two biggest gatherings in the world today was #Area51storm and #ClimateStrike so this is our generation and yes we are hella proud of it pic.twitter.com/wAmPl4Q0GL

I stand in support of the global #climatestrike today. We need to do everything we can to protect our planet and humanity. Find out more at https://t.co/YZFM0eBd0n pic.twitter.com/SD52R7uywL

Very large crowd of mostly students - along with many other older learners - gathered at Portland City Hall #ClimateStrike pic.twitter.com/dyceXwpi1E

The largest mobilization in the history of the #climate movement...and IT'S STILL GOING!!!

"This could only be a fantasy. I would never have predicted or believed that this was going to happen."

Campaigner Greta Thunberg says the size of the "magnificent" #ClimateStrike protests around the world is "such a victory". pic.twitter.com/wpncda94Qe 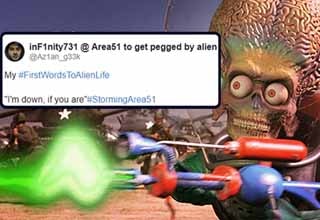 NEXT ARTICLE Best Tweets And Reactions To #StormingArea51