It was an eventful Kentucky Derby for rap artist, Jack Harlow who was seen hanging out with fellow musician Drake for most of the race. However, Harlow has the internet up in arms after video (tweeted from the official Kentucky Derby account) surfaced of him being carried over the mud by two black men so as not to get his shoes dirty.

Gotta keep the kicks clean for Riders Up, @jackharlow. pic.twitter.com/Vj8rDJw0sP

Yikes. To say that's not a good look would be a wild understatement. Needless to say, you can't (nor should you) write this stuff.

He was captured wearing a white suit, being carried by 2 black men, all while already looking like Colonel Sanders… AND in KENTUCKY lmfaoooooo https://t.co/056lGO8Yuq

The internet had a field day, as it tends to do.

Jack Harlow was at the Derby acting like Prince Ali Ababwa, getting carried around by his team of men to protect him and keep him fresh https://t.co/jv7spzB0Td

carrying a white man on your shoulders in kentucky??? https://t.co/6pvdp3LogF pic.twitter.com/mOj6BIjbj2

there’s not enough commas on a paycheck to have me carrying a white person … https://t.co/03gwoBJCUV

And listen, let's not act like Jack Harlow is some sort of prodigal son. He literally didn't do anything to make that Fergie sample better in any way.

I told y’all we got to stop gassing up these mediocre white boys https://t.co/CW6SLZZyhY

harriet tubman would beat them all into last week https://t.co/HmX1VI5dra

Jack Harlow said, “Carry me boys. I’d hate for y’all to have to shine my shoes a 2nd time.” https://t.co/T2BB2g1WUr pic.twitter.com/4usiPeZROz

Here's an idea. Stop worshipping white dudes who don't give a f**k about anyone but themselves. 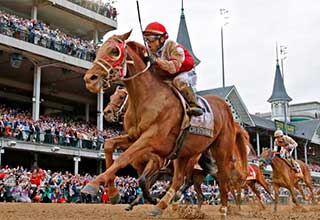