After discovering her boyfriend was cheating on her, @Bachins1Chelsea invited his new girl @christen_09 over to confront the dude.

When he thinks he’s gonna have his girlfriend back home and his side hoe at college, but y’all find out about each other surprise!!! pic.twitter.com/bU2O0lVXQZ

“Damn that’s crazy how y’all know each other” pic.twitter.com/sKElj7t5st

The video was cut short on account of Snapchat, but the dude's reaction is clear.

Man in the video? Oh don’t worry, he was speechless. He didn’t think I had the balls to confront him for the fifth time; however!, this time, I brought the proof into his own apartment

His friends even showed up to the relationship intervention.

Christen Explained her side of the ordeal.

Ok but y’all need to understand before you come at me saying I’m a dumb bitch or something: this man mentally abused and manipulated me for almost 5 months. He had me buying him shit and doing everything for him. He had MANY opportunities to walk away from me and chose to lie.

By the looks of things, this busted dude is starting a diet of celibacy and singleness.

His whole school knows. No worries, he’s completely exposed and it is no longer my problem 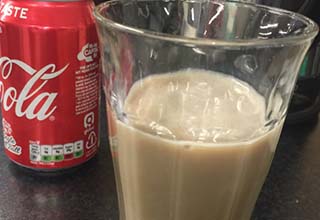 NEXT ARTICLE Dude Trolled His Coworkers With a Disgusting Drink