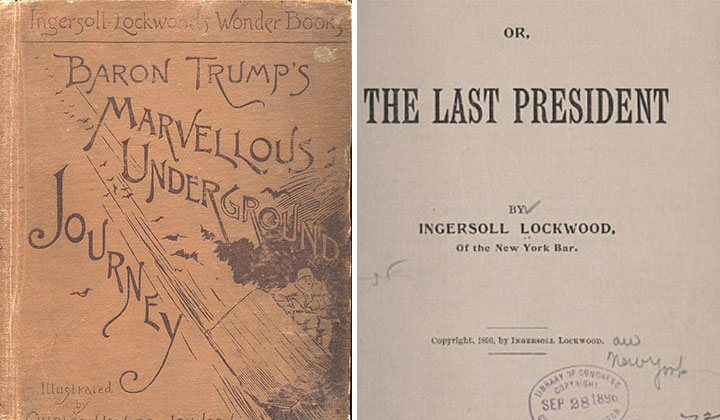 Okay, let's start with the facts. Ingersoll Lockwood, an American author and lawyer published two children's books and one short pamphlet between 1890 and 1896. In 1898, Lockwood published his first book titled, "The Travels and Adventures of Little Baron Trump and His Wonderful Dog Bulger", which was then followed up in 1893 with, "Baron Trump's Marvelous Underground Journey". Lockwood last 'book' was published in 1896 and titled, "1900: or, The Last President", which can all be found in full on archive.org

Before we go any further you must know it is not easy sleeping when you constantly question if your reality is real. We are sorry if this keeps you up at night and thank you for reading. Oh, and get your tinfoil hats ready, we'll let you know when to put them on.

Ingersoll Lockwood's first two novels follow a young boy named Wilhelm Heinrich Sebastian Von Troomp. Little Baron Trump, as he is referred to comes from a very wealthy family that lives on 5th avenue in New York City, in what is called Trump Castle. In the books Little Baron and his dog Bulger, go on a series of wild adventures through other dimensions and time with the help of a mystical character named Don Fum. Don helps Baron and Bulger find the portal to his 'World within a World', that eventually (and we're not kidding) lead them to Russia. 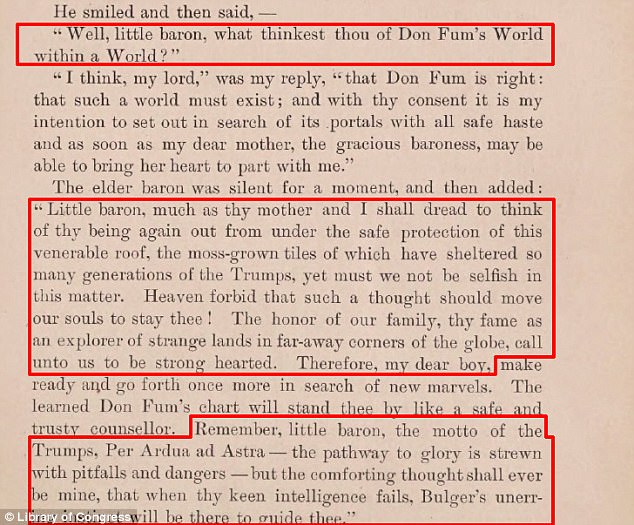 The story is your average (to the day) children's novel, written in response to works like Lewis Caroll's, "Alice In Wonderland". Though, that is not why we are talking about these books. Their merit is simply their striking closeness with our modern world. A world where our President is Donald Trump, who himself lived on 5th avenue with his son Barron in we call Trump Tower. The similarities are strange, yet at the same time are all there really is.

Lockwood's final novel, "1900: Or The Last President", begins with a scene of New York City in chaos. It's early November and a hugely unpopular outsider candidate has just won the election for the presidency. Police officers are in the streets trying to calm the growing rioters as, "mobs of vast size are organizing under the lead of anarchists and socialists, and threaten to plunder and despoil the houses of the rich who have wronged and oppressed them for so many years" - “the Fifth Avenue Hotel will be the first to feel the fury of the mob.” That fifth avenue hotel is now where Trump tower stands, and those anarchists and socialists are present day enemies of Donald Trump. 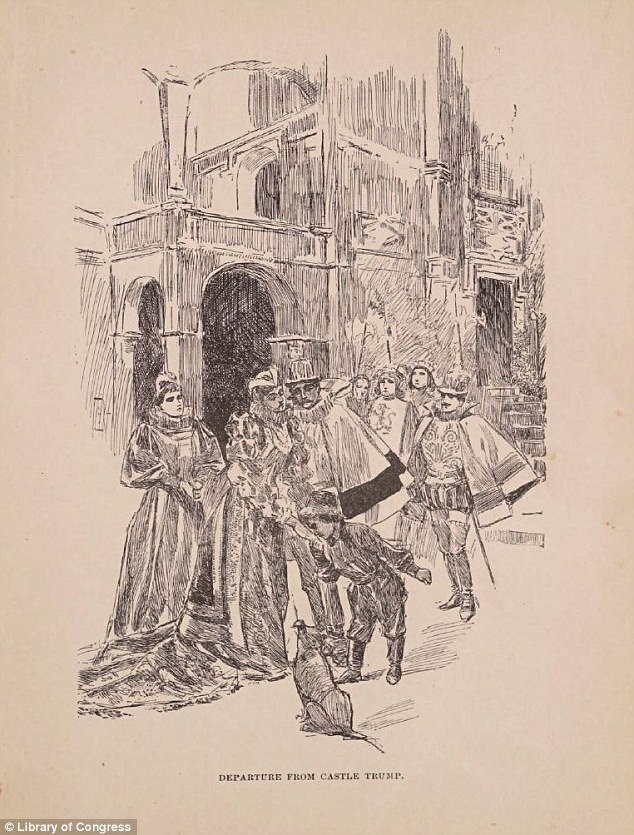 In light of these strange connections between Lockwood's book and our world, there are a number of other missing pieces. For example, the real Barron Trump does not have a dog, let alone a dog named Bugler. And when Lockwood’s books were rediscovery this was the case. However, that is no longer true, because the Trumps did eventually adopt a Goldendoodle named Patton. Why, because it’s seen as strange if a president doesn’t have any pets.

It was reported that Trump didn’t care much for a pet, but Melania knew Barron would want one. Reports say Barron had tears in his eyes when the two met for the first time. Wait, so what, he has a dog, it’s not Bulger though? Now would be a good time to get those hats out.

So Barron’s dogs' name is Patton. George S. Patton is an American Military captain who was an instrumental factor in the US’s victory at The Battle of The Bulge during WWII. We know it’s stretch but with all the strange connections so far it’s not too big a leap to take from Bulge to Bulger. 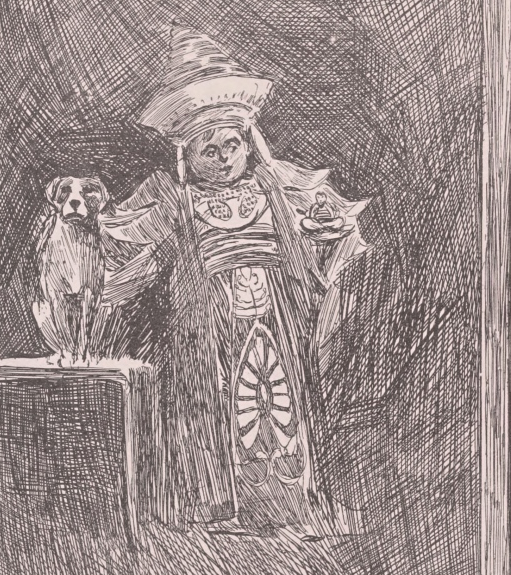 In addition to the stories of Baron Trump, there is another book written by Ingersoll Lockwood titled, "Laconics of Cult" where Lockwood writes about superstition and the occult, much in the same light he does in his children novels. Laconic is an adjective that literally means, "of few words", which seems to be a spot on description of the real Barron Trump.

Now with that out of the way, let's begin. These books written by Lockwood are the basis for a greater and farther-reaching story than we could imagine. And besides being one of the most quality shitposts in Internet history, who knows, it might just be true. 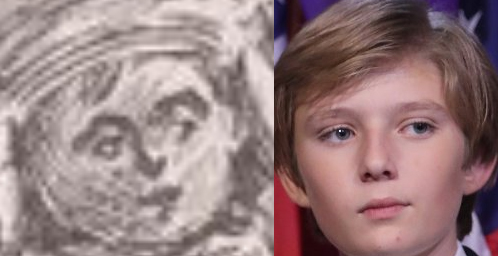 Donald Trump is a time traveler. There I said it, but we don’t have proof.

John Trump, the uncle of Donald Trump was an engineer who worked for MIT at the time of Nikola Tesla’s death. When Tesla died the federal government confiscated all of Tesla’s work and hired a group of scientists and engineers to help them decipher his notes. John Trump was among the men chosen for this task.

In interviews that John gave later in life, he talks about how these notes of Tesla’s influenced him to study new methodologies beyond what he thought probable. And of course, the speculation is that John Trump discovered the means of time travel but died before it could be realized.

This is where Trump comes into play. John Trump left his nephew with his findings hoping that at a later date Trump would be able to complete what he started. This is where two theories combine into one. John Titor, the famous “time traveller” is believed to actually be Donald Trump.

Trump went forward in time and saw a world ruined by war and famine, disguising himself as John Titor and joining the army in the future. It’s a weak jump and more on this idea below in the original shitpost. I don’t see what this adds to the already strange story.

Now, as in any good story, there needs to be an explanation. Something ‘real’ that grounds the narrative in a world with rules an laws. Even the best shitposts do this because just making shit up only entertains for so long before narrative the runs its course. Well, in this story, that figure is none other than Pepe The Frog.

All this time travel and divine destiny are made possible for a number of reasons, but all of them due to the ancient Egyptian god of chaos Kek or Keku. Kek is a figure who appears as a frog-headed being and in ancient Egypt was worship for his magical abilities. Many people joke that the popular meme Pepe The Frog is a modern-day reincarnation of, Kek the god of chaos. Furthermore, Pepe became a symbol of the Trump campaign and in doing so became a sign of the far-right as the two became synonymous in the mainstream.

Why does this matter? Well, people joked and joked about meme magic for months leading up to the election. The Trump campaign even embraced the Pepe memes, Trump retweeted images of himself as Pepe on occasion and heavily relied on online supporters for their memes.

It seemed like Trump winning the election was near impossible. No one and I mean, no one in the mainstream honestly thought Trump has a snowball's chance in hell at beating Hillary Clinton. It seemed like the only way to victory was by some sort of luck or dare I say magic. So what do we make of this? The books, Trump’s family history and of course his victory. Trump has done things many thought impossible. So what the heck, maybe he is a time traveller, it wouldn’t be the first time we were wrong.

But no matter the questions we can answer or the dots we can connect, there is still one big question to ask, and that's why? Why would Donald Trump need to time travel? What is he saving us from? What is he getting us into? And those questions my friends are best left for the comments.

Below is the original 4chan thread which first came up with this theory. Enjoy. 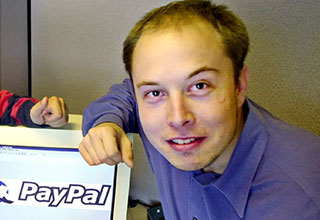 NEXT ARTICLE Dudes Rock Is The Movement For Dudes By Dudes