An audience member hands singer Chalino Sanchez a note mid-performance. Chalino pauses, grimacing for a moment, and continues singing. Just after midnight, as Chalino and friends are driving home through a deserted stretch of highway, they are pulled over by men in State Police uniforms who tell Sanchez their commandant would like to speak with him. Chalino leaves, his friends and family members depart, and the next morning he is found on the roadside, wrists bound, shot in the back of the head.

This is video capturing the exact moment Chalino Sanchez was handed a note that said he was going to die.

Who Was Chalino Sanchez and Why Was He Killed?

Chalino Sanchez was a Mexican folk singer known for his corridos, traditional ballads that told the stories of outlaws and criminals. Nobody can say for certain why Sanchez was killed that night or what the note said word-for-word, but there are a few theories that paint a picture of a wild life of more than just singing.

Chalino Sanchez was born on 30 August, 1960 on a ranch in Sinaloa, Mexico. He grew up extremely poor in a rough neck of the woods just twenty miles from Culiacán where numerous drug-lords of note rose to power, including the founder of the Guadalajara Cartel, Miguel Ángel Félix Gallardo.

Eye for an Eye 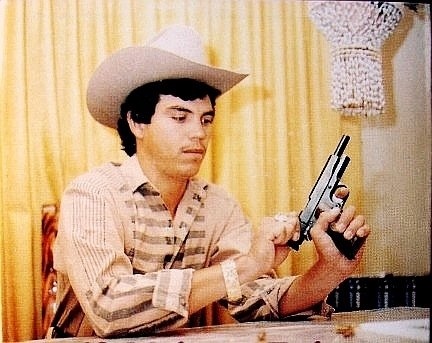 When Sanchez was fifteen, his sister was raped by a local gangster by the name of "Chapo" Perez. Two years later, Chalino would run into Perez at a party and shoot him dead on the spot.

Forced to flee, Chalino embarked for Tijuana, where he would spend the next few years working as a Coyote, smuggling people across the border. During this time he would marry his wife, Marisela, whom he would be with until the night he was handed that fateful note in 1992.

Eventually, Chalino set out for the US, hopping the border as an undocumented migrant and spending the next few years on the down low, working in restaurants and peddling small amounts of marijuana and cocaine -- keeping a low profile, for the most part as he made his way to Los Angeles.

And then his brother Armando, was shot and killed in a hotel in Tijuana. 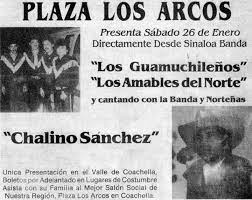 Sanchez would be arrested himself shortly after Armando's murder and spend some time in jail. There he began to work on music, eventually composing his first corrido for Armando himself.

This turn towards music would blossom behind bars, with Chalino being approached by other inmates and lifelong criminals to turn their own stories into songs. Chalino's music soared in popularity outside prison, blooming into a full-blown career with many coming to him for a chance to be immortalized in song and willing to compensate him handsomely.

A record deal later, Sanchez is now a full-blown professional musician with his own distinct style, singing his brand of corrido in his regional Sinaloan accent and becoming something of an icon -- especially among outlaws.

But Chalino was, as we have learned, more than just a singer and by all accounts a hardened criminal himself with already the blood of at least one man on his hands.

During a performance at Los Arcos Nightclub in Coachella, CA, a man by the name of Eduardo Gallegos leaped onto the stage and shot Chalino from point-blank range. Chalino, armed himself, shot back. The two reportedly began a wild, "running gun battle" on stage that left them both in the hospital and one member of the audience dead.

It is unknown what Gallegos' motivation for the attack was.

Wrong Song at the Wrong Place

Criminals make enemies. Spend your life robbing, stealing, and double-crossing and you're naturally going to rub at least a few people the wrong way. Add to this pattern the fact that most of the people you're ripping off and backstabbing are themselves career criminals, and it's understandable why some of the "ballads" that glorify the lives and deeds of certain outlaws may be somewhat unwelcome to their enemies.

When it comes to the corridos that Sanchez was famous for composing and performing, it was well known that some don't play well for certain audiences. Some have speculated that the "death note" Sanchez is seen being handed could have been something as simple as playing the wrong song with the wrong person in the room. That he inflated the ego of the wrong higher-up in the wrong cartel at the wrong time and paid for it with his life.

But see, while speculation runs wild about whether Chalino met his end on that dusty stretch of highway in the middle of the desert because of revenge for the murder of his sister's rapist so many years beforehand, or for the insane on-stage gun battle he had only four months earlier or whether it was just a really unfortunate song choice, it's impossible to say.

Chalino had blood on his hands and when you spend your entire life swimming with sharks, you're bound to get bit. Though despite any disapproval one may have of the way Chalino led his life, we can admire the singular fact that he finished the song. 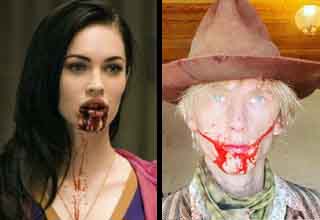 NEXT ARTICLE MGK Proposes to Megan Fox with Fugly Ring and Blood Drinking, Gets Roasted