We have entered a new stage in the life of the Internet. And we think for the sake of preservation, and to allow a younger generation a chance to see and be scared by the same videos that terrified us as kids.

So here is a short list and in now way is this the definitive list, but we think it's a start. So share this with your kids, your neighbors and anyone under the age of 25 who might have not seen these classic scary clips before.

I Feel Fantastic - In this chilling video, we see a white faced animatronic singing, “I feel fantastic” over and over again. The early Casio piano music and the robots movements add up to make the viewer feel extremely creeped out. The video is edited so that he robot can be seen singing, sitting on the floor and then sitting on the ceiling in what it appears to be a cloud of static. For some reason, there is also a very creepy shot what appears to be a backyard, just zooming in and out of a pile of dirt. This is never explained but some people online have a theory that the video is shot by a suspected serial killer and the pile out back is where he buried his victims.

The Area 51 Employee Phone Call - Art Bell runs a radio program called Coast to Coast AM, which deals in the paranormal and unexplained. Although most of the people that call in are utterly insane, there was one call in 1997 that sent chills through the listening community. An unidentified man called the radio station, saying that he was a former employee of the legendary, Area 51, and was let go on  a medical discharge. The caller seems to be crying and out of breath, saying that they will track his call at any moment. He tries to tell Art that the government knows about interdimensional beings when all of the sudden the radio show suddenly goes black. Art is extremely surprised that the radio station was knocked off when it final returns seconds later. This caller is either the real deal or the best actor out there.

Guy Has Great Grandmother’s Coffin in His Backyard - So this video was uploaded to youtube on October 28th, 2010, so some say it is a fake body . . . let’s hope so. The man in the video goes under the YouTube username: Djdeafjoey and is completely deaf, using ASL throughout his videos. In this one, he explains that it is too expensive to rebury his great grandmother and puts her on display by opening her coffin in his backyard. The real squirming starts at 3:37 when he starts kissing his grandmother on the lips. (Click with caution)

Elisa Lam Elevator Footage - This strange CCTV footage from the elevator at The Cecil Hotel, shows Canadian student Elisa Lam the day before she would die. She looks like someone (or something) is after her, although nothing is ever shown on the cameras. Her body would be discovered a few days later after residents at the hotel complained about poor water pressure and bad smelling water in their rooms. Lam’s body was found floating the 1000 gallon water tank on the hotel's roof just hours later. What makes this super creepy as well, is that the Cecil Hotel was also home to Richard Ramirez, aka The Night Stalker.

The Hand Thing - There are entire channels created to providing the viewer with nothing but full creep out and cringe. Shaye Saint John is truly the queen of YouTube creep outs. Now believed to be created by artist Eric Fournier, Saint John has tons of videos of  featuring her super creepy mannequin-mismatched body doing repetitive and insane acts. In this video, another mannequin masked man is seen coming to the door and asking Shaye, "Are you still doing that hand thing?" Truly, WTF?

Blank Room Soup - This video has been circulating around the deep web and is either an insane art project or the moments before this man’s death. The man can be seen frantically eating a bowl of what appears to be ramen soup with a ladle. As he frantically eats a bobble-headed mascot comes in through the door and begins to pet his head and shoulders. The man's sobbing and the gentle patting of the mascot will leave you wondering, “Why was the guy so afraid of?” and “What happened when the camera shut off?”

Max Headroom TV Hijack - One late evening on November 22, 1987, two television stations in the Chicago area became the victim of what people in the television business call a “signal intrusion.” Simply put, someone had hacked the airwaves and they were broadcast into millions of homes. The hacker wore a Max Headroom mask, dancing around and saying things like “Your love is fading” and “I stole CBS.” The video ends with the hacker bending over bare-ass while getting spanked by a fly swatter from and unknown assistant.

Webdriver Torso - This is a unique one on the list, because it’s not just a single video, it’s the entire channel. Webdriver Torso is an unknown user on YouTube that uploads a video every few minutes. The videos consist of a blue square and a red square moving around in different formations with the sound of a beeping drone in the background. The videos can range in time from 10 seconds to 20 minutes. Some people say Webdriver Torso is a spy signal set to activate people like The Manchurian Candidate. Other people believe it’s a complex puzzle by a genius, like the ones released by Cicada 3301. As of 2016, Webdriver Torso has 490,000 video uploads.

Sad Satan - This deep web video game premiered in 2015 and has been creeping out people ever since. The video footage of the game shows lights in and out of a strange hallway or room, with distant sometimes extremely disturbing sounds fading in and out in the background. There are also distorted audio clips from what appears to be satanic recording that will trigger when you walk into certain rooms or look in a certain direction. Also, it's been reported that player's computers have been hacked, with files appearing with undecipherable text and 666 repeated throughout.

Russian Mental Patient - This video was uploaded to the deep web and it appears to be a mental patient losing whatever mental stability he was holding onto. The patient screams, runs around the room, moves the bed violently and then at the end, appears to levitate. There is no explanation for this video and no one has come forward to claim it as the original uploader. 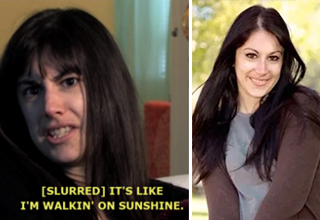