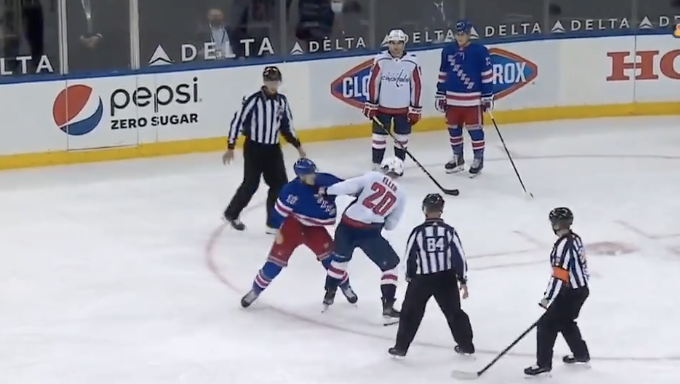 Bad blood has been stirring between these two teams since May 3rd when Tom Wilson of the Washington Capitals body slammed Artemi Panarin of the New York Rangers.

Tom Wilson gets a 10-minute misconduct for punching Buchnevich in the head on the ground and body slamming Panarin pic.twitter.com/fg2HRej8yD

Yeah, um...you're not allowed to do that in hockey. But like okay. Tom Wilson was fined for the body slam, but not suspended. This "play" also ended Panarin's season prompting the New York Rangers official twitter account to tweet this statement.

Fast forward to their next game a mere two days later. Here's the opening face off.

3 FIGHTS OFF THE OPENING FACEOFF BETWEEN THE CAPS AND RANGERS pic.twitter.com/EIyoJ4GPOQ

Can anyone guess what happened when Tom Wilson stepped onto the ice for his first shift?

Tom Wilson challenged by Brendan Smith immediately after stepping on the ice for his first shift tonight pic.twitter.com/5KudVGgzQB

Ryan Strome takes on Lars Ellers in yet another fight in the #Rangers #Capitals game... A classic brawl. #Hockey pic.twitter.com/0Z2ErRnRJN

Let's take you down to ice level for a look at the penalty box which definitely isn't adhering to New York covid restrictions.

New York City is BACK

And then there was this cross-check from Pavel Buchnevich for good measure.

Suspension coming for Buchnevich as he is assessed a major penalty and misconduct for cross-checking Mantha directly in the face. Disgusting pic.twitter.com/Rwphc5QUnu

For anyone who still loves old time hockey, this was a game for the ages. Yet in a fitting end to their already dismal season, the Rangers would go on to lose 4-2.