The TikToker Amber Mezner is under serious fire after the user Sunset Makeup posted a video accusing her of bullying. The incidents allegedly occurred while Amber was in high school and Sunset was in middle school, and since the video a slew of new people have come forward with their own accusations and proof. Some are as serious as the possession and production of child pornography.

After the accusations, Amber posted a video denying her role in any bullying, claiming that she herself was bullied to such an extent that she ultimately switched to home schooling. She also claims that she was a supporter of many people who are now accusing her.

@ambermezner Literally don’t even know this person . These accusations aren’t True & it’s messed up to completely make up a story . I was bullied all through my school years . I would never put someone down for things that I did myself doesn’t even make sense ! The ppl I actually had problems w back then I fted tonight & talked it out & we’re chill now . If you felt traumatized by me for whatever reason why haven’t you ever spoke to me before!!! You have no proof and people are taking your word and now I’m getting Bullied all over again !! #fyp #fakerumor @Sunset Makeup ♬ original sound - ☆★Amber Mezner★☆

As more apparent victims come forward, their accusations are becoming exceedingly serious, with some considering taking legal action. Amber's mother has become involved as well, both as an alleged bully, and in trying to silence the victims. Perhaps the most serious accusation comes in the form of a video Amber supposedly took and posted of underaged students against their will, while they were naked in a pool.

one of the many victims speaks out.

While it's impossible to verify most of these accusations, there seems at the very least to be a disturbing pattern of behavior affecting a striking number of people. This Twitter thread documents a sickening number of serious accusations, and there are surely more to come. If people do decide to press charges, they might just have a leg to stand on. Bullies everywhere need to take note: in this modern digital age, your actions just might catch up to you. 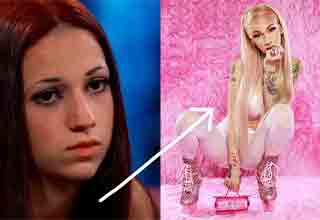 NEXT ARTICLE Bhad Bhabie Made $50 Million on OnlyFans This Year