TikToker qu33n.status2.0 has gone viral for a recent video in which she attempts to buy a coffee for a local homeless man and gets shut down – at Tim Hortons of all places. She pulls up to the drive-thru and orders two triple triples (triple sugar, triple cream), one for herself and one for her homeless “friend,” and to her dismay, gets denied. Upon figuring out who it was for, the drive-thru worker taking her order refuses to sell her coffee because they’re supposedly "not allowed to serve" the homeless man who lives in the area.

@qu33n.status2.0 @Tim Hortons If this is the way you treat your customers I’m done being one #timhortons #dobetter #fyp ♬ original sound - Qu33n.status

The coarse attitude the drive-thru worker takes toward the unfortunate individual flies in the face of the whole ‘nice Canadian’ stereotype. Bad looks, Timmie’s, bad looks. Let this samaritan buy the man a coffee.

Qu33n.status2.0’s daughter Shyanna took to the comment section to elaborate on the situation. Apparently, her mother had been to the same Tim Horton’s a day earlier and tried to buy him a coffee without recording or making a fuss, but was actively prevented from doing so once they discovered the coffee was for the homeless man. “A business cannot dictate what I do with my purchase off of their property actually. and this man is also never loitering on their property or begging,” Shyanna explains.

This second attempt to buy him coffee was likely a means of collecting proof of the unbelievable behavior, and perhaps a chance at redemption, as is evidenced by the fact that she records the whole incident, promises to call corporate on the cold, uncaring coffee shop, and uploads it all to TikTok. 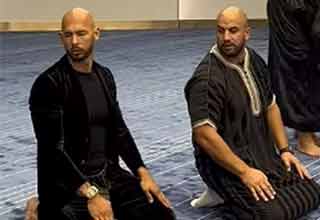