Of all the times to lose a truckload of toilet paper, it had to be now...

Early this Wednesday morning, a trucker hauling toilet paper from Alabama to San Antonio fell asleep at the wheel and crashed his 18 wheeler on a highway in northern Texas, spilling potentially thousands of rolls of two-ply gold all across the road.

Much of the toilet paper caught fire and burnt up into heaping piles of ashes. Firefighters arrived to extinguish the flames, but it doesn't seem like any of it could be salvaged.

Thankfully, the driver reported to local news sources that he and his dog, who was riding inside the truck with him, were not critically injured.

The accident is a reminder of how vulnerable people working on the front lines are during the pandemic, especially service industry workers and those doing manual labor. Some truck drivers have even been noted as being overworked during this time, which can put them and others around them in danger.

At any other time, you might have thought a flaming pile of toilet paper on the side of a road would be funny to see, but now it feels more tragic.

Seeing toilet paper get destroyed is even worse than people hoarding it. Just think of all the butts that may go unwiped, or worse...

For now, let's avoid TP-ing our neighbors houses and cooking Charmin casserole unless it's absolutely necessary. 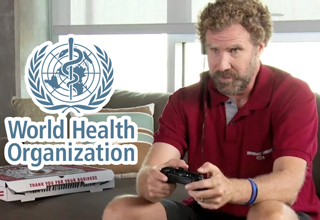