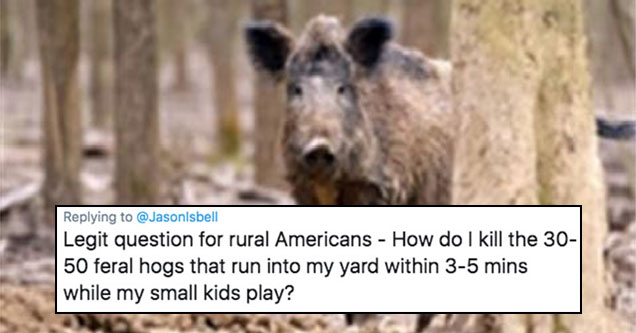 The Internet is a strange place. It seems like we say that here often and that's because we do and because it is. But even on a day like today, people are still able to find something, even if it's a strange something to help them laugh.

So why is Twitter joking about 30-50 Feral Hogs? Good question. After yesterday's double-dose of American made mass shootings people took to Twitter to express their concern with assault-styled weapons being so readily available to the American public.

If you’re on here arguing the definition of “assault weapon” today you are part of the problem. You know what an assault weapon is, and you know you don’t need one.

Jason Isbell posted the above tweet asking why people need assault weapons and got maybe the best only real political response in Twitter history.

Legit question for rural Americans - How do I kill the 30-50 feral hogs that run into my yard within 3-5 mins while my small kids play?

Now in William NcNabb's defence, he wasn't the only brainiac trying to dispell this evil-liberal-narrative that guns are the problem. No epic science dude Neil Degrasse Tyson was doing himself some solid thinking too.

In the past 48hrs, the USA horrifically lost 34 people to mass shootings.

On average, across any 48hrs, we also lose…

Often our emotions respond more to spectacle than to data.

It's times like these when all American's must come together and ask the tough questions, to put aside our differences and ask, how are we supposed to kill 30-50 feral hogs running through our backyards without and AK-47?

Hate when 30-50 feral hogs run into my yard as my kids play, forcing me to dual wield AR-15s as I mow them down https://t.co/NR1Pzi0TUx

can't leave my house because of the 30-50 feral hogs in the yard pic.twitter.com/B56irhHdj1

Maybe the Feral Hogs storm his yard every day because he keeps shooting them. pic.twitter.com/a6GZvyDWkQ

here is my feral hogs submission, thank you pic.twitter.com/WiA3DoCOBW

tfw the feral hogs ate your kids because you only had 15 round mags pic.twitter.com/SJim98HIbD

30-50 feral hogs, looking at your unfenced yard with small children in it: pic.twitter.com/Ttr6dkdEKO

The 47 in AK-47 stands for the number of feral hogs it kills per minute this is canon now. 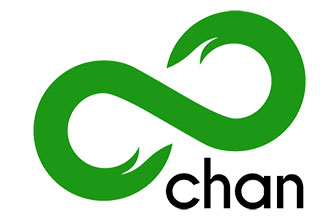