A good day to all of you,

I know that I went afk on all of you again after leaving a teaser about writing a blog about the technological singularity, and I do plan to do a full write up on that subject in due time. I did want to be able to have the time to lend it the credence that the subject deserves before doing so. At this point, it will be coming some time in the future, but for now, I am just going to ramble a bit about things.

Lets start off with a bit of my background on this site. I have been here on and off since the tail end of 2008, which to be honest, those were the glory days of EBW. Ebaums had moved past the early stages of being a crappy underfunded website thought up by a random guy named Eric to showcase random internet oddities and humor into the burgeoning mecca of all things ongoing with the internet. Yes EBW was always kind of a shady place to spend our time, and we were all assholes who just lived to out asshole each other, but for those of us who could see past the trolling, we found this place to be our special corner of the internet. The blog community in particular had this particular beauty about it. We called it our bar. We all knew eachother, to earn a place at the table you had to fucking earn that shit, and through our brand of ruthless criticism of the writing of others, it actually made those who stuck with it, into some incredible writers and story tellers. Then something happened. Something none of us could present because as much as we called this place out home, we did not own it, and while we as the bloggers of EBW maintained the quality as best we could....we still could not prevent the sale of EBW and the dismissal of Eric and his staff.

Our moderators and admins were all stripped of their ability to control the wave of spam and useless posts. The bar got a lot more crowded and slowly but surely, it pushed away the incredible people who called this place home.  Friendships and bonds were still made between us all, and I still drop a line to many of the old crew to keep up with them from time to time, but never as often as I would like, and I do not always hear back. We all were still large parts of eachothers lives at that time and while most of us still lurk in the shadows of the front page and take peeks inside from time to time, the lack of real contributions to the site has tapered to nonexistance, and we just fade back into the crowd.

There is hope though, for the first time in a while, there have been stirrings on this site with somewhat decent postings from new members. The new administration, while only valiant efforts of futility have been made to change things for the better, did actually make attempts to make things better. But, I came to the realization, and I think it may be after they have made the same one....They need us.  They need good writers, creating good content, to make the blog section worth visiting again. And I will give them what I am able, as I am able to do so. My blogs may be scattered and random starting out, but writing has always been a form of release for me. A way to clear my head and a way to connect with others. I am not out to try to make this a call to action on part of older members of this community, but perhaps one of the old crew may stumble back in from time to time.

Consistency has always been the determining factor for any resurgence or growth of any endeavor. As this year comes to a close, I just want to say that I would like this place to be better, and I plan to do my part as best I can, I am however only one person, and it will take others joining me in telling stories, sharing experiences, and generally being an asshole who will touch your god damn soul through clever wordplay. Because while the regurgitated lists and news articles are much better than the spam that previously crowded the blog section, the stories shared by talented writers was really what brought us all back day after day so many years ago.

I still hold a soft spot for the blog section, and I will do my best to continue to spin tales, share experiences, and perhaps keep you on the edge of your seat waiting for more...but for now,

This has been another moment of your time wasted by,

P.S.  I am moving away from using the sea serpent/sock puppet and dissolving my anonymity and using a picture of myself from here out. 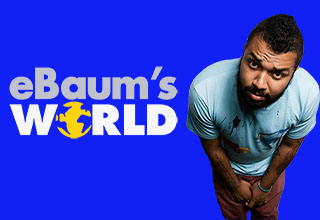