The world’s douchiest food fight has had the heat turned up. “Diners, Drive-Ins, and Dives” star and celebrity chef Guy Fieri has been putting up with Anthony Bourdain’s insults for years. Bourdain, host of the Travel Channel’s “No Reservations,” has a long history of beefing with his fellow food buff. He once called Fieri’s restaurant a “terror-dome”, and said he looked like “if Ed Hardy f***ed a juggalo.” Most recently, in a GQ interview, Bourdain said ““So I sort of feel in a heartfelt way for Guy [Fieri]. I wonder about him. He’s 52-years-old and still rolling around in the flame outfit . . . What does he do? How does Guy Fieri de-douche?”

“De-douche” really takes the bacon, something Guy Fieri does a lot of himself. Fieri, who is actually 47, finally told Bourdain to amuse his own bouche. “I don’t like him making fun of people, and I don’t like him talking shit. And he’s never talked shit to my face,” Fieri said, though to be fair his face is usually pretty full. “I know he’s definitely gotta have issues, ’cos the average person doesn’t behave that way. It’s not that I’m not open to the reality that the food world was like this from a few people’s perspective. It’s just, What are you doing? What is your instigation? You have nothing else to f***ing worry about than if I have bleached hair or not? I mean, f***.”

“I mean, f***” is a decent point. But Bourdain is not ashamed of his issues. “The day you can’t tell jokes about Guy Fieri, comedy as we know it is dead. I tell jokes about those guys; it's what I do” he told People magazine. What he “does” certainly isn’t cook, as “Good Eats” star Alton Brown pointed out. “When was the last time you saw Anthony Bourdain actually cook anything?” Brown asked. “ I’ve spent 14 years cooking my own food on television and I’ve never seen him cook a meal.” We’ll see who’s left eating their words when the food settles. 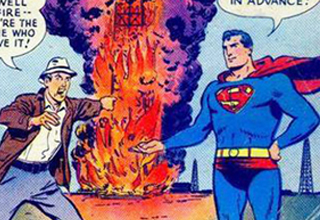 NEXT BLOG 10 Reasons Superman is a Complete Dick