March madness is about to kick off, so here's our hot take on the #1 game to watch in the first round. 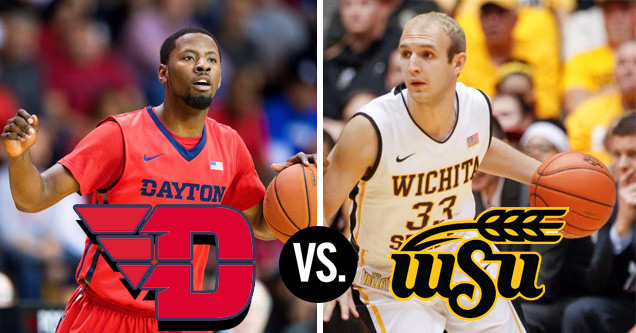 Perhaps the biggest story heading into the 2017 Mens NCAA Basketball tournament is the seeding of the Wichita State Shockers. With a 30-4 record the Shockers are viewed by unbiased oddsmakers as a top-10 team in all of college basketball. But shockingly (pun intended) the NCAA Tournament committee jobbed Wichita State with a 10 seed.

Wichita State finds themselves in a familiar position to last year’s tournament, where they were an 11 seed and ended up beating the 6 seed, Arizona by a final score of 65-55. Wichita State will use their low seeding as motivation to show the nation that they are one of college basketball’s best teams. While the Dayton Flyers will look at the odds and use them as motivation; “Whoever counted us out can’t count,” Dayton guard Scoochie Smith wrote Sunday on Twitter.

The Dayton Flyers earned a 7 seed after putting up a 24-7 overall record this season and winning the Atlantic 10 conference championship. Coach Archie Miller has been impressive in his six years with the program, he’s won 24 or more games in four straight seasons, and also took the Flyers to the Elite Eight in 2014. The team is led by seniors Charles Cooke (16.1 ppg), Kendall Pollard (14.1 ppg, 5.1 rpg), and point guard Scoochie Smith (13.5 ppg, 4.5 apg). The Flyers are legit, and cover all the intangibles of being a tournament sleeper, but they drew a tremendously tough opponent in the first round.

Dayton can get pushed around on the inside, barely keeping a positive rebound margin during the regular season, in a relatively weak conference. So while the Flyers backcourt of Smith and Cooke is regarded as one of the top combos in college hoops, a physical front court can cause them some major problems. Something that should not be overlooked is the team’s suspect free throw shooting, they are 69.1% from the stripe, and this game could come down to those oh so valuable free throws.

As a team, Wichita State is shooting 40.7 percent from 3-point-range, which ranks sixth in the nation. Kansas transfer Conner Frankamp is shooting 44 percent from deep, while Markis McDuffie, Landry Shamet and Darral Willis all average double digit scoring. As a team Wichita State is scoring 82.1 points per game on 47.4 percent shooting from the field, so they can score, but their major strength may be on the defensive end. They are held their opponents to just 62.4 points per game and 37.8 percent shooting from the field. With those kind of stats it shouldn’t come as a surprise that the Shockers finished their season strong, winning 18 of their last 19 games, with 17 of those wins coming by double digits.

This was supposed to be a rebuilding year for Wichita State after losing two of the best players in school history in Fred Van Vleet and Ron Baker. The shockers were bothered by the zone defense of the Louisville Cardinals in their loss to the Cardinals in November where they shot just 32 percent. They also suffered big losses to Michigan State, and Oklahoma State, so they may not be able matchup against the powerhouse teams in the tournament.

This is sure to be one of the most exciting games of the first round. Dayton is a solid team, and how can you not root for a guy named Scoochie? However, Wichita State is considered to be one of the top ten teams in the country, and their 10 seed is downright insulting. Overall the Shockers are just too hot right now, and fueled by the motivation of being slighted in the tournament seeding, we're putting $100 on Wichita State to beat the spread.