Regardless of today's technology, or the fear of obsoleting print news they scared us with in Journalism courses, myself and many others still find satisfaction in turning to the daily papers for what's up on current events.

It's no wonder the major circulations still hold true to their reader base in the millions. A number of stories and reports from far and wide, big and small, all have their place outside the obscurity of 10 pt. website captions sans large, bright pictures. Taking the time to open a paper actually draws you to tiny columns and segments you'd never locate on the vast majority of sites. Headline shockers alone do not equate to superlative knowledge of the goings-on in the world.

Besides, newspapers, magazines, quarterlies, etc. can be quite fun as well as informative. This is where signature columnists, editorial writers, and experts come in. In a way, they're making the periodical what it is; not just the news reported.

This is why I love reading NY Post, among other publications. The headlines are catchy, the regular writers witty, the editorials chock-full of comic relief, and the news you'll discover is as varied and outlandish as the individuals of NY themselves.

And as usual, nowhere on many sites does anyone seem privy to certain things. Stories deemed of a lesser-vital nature don't get touched. And the weird thing is, a lot of what's passed over is quirky, intriguing, and hilarious just the same. Kinda like this one:

Former Silicon Valley entrepreneur William McKee was a normal guy with a normal life - until he noticed he was going bald. So he was given the generic form of a hair growth medication known as Propecia.

McKee was told to take one a day, yet after nine months he began to feel...different.

McKee claims that after just a few weeks on the pill, his "rock hard stomach" began to soften, along with shoulders lessening, hips widening, and breasts forming.

By the ninth month, McKee had finally come to a decision - he felt more female than male, and would begin wearing blonde wigs, tight dresses, and going by the name Mandi. He claims he never had a single desire to become transgendered before searching a cure for baldness.

"It felt like the real me wasn't there before," he claimed. "...for nine months I did take one of the two most popular drugs they prescribe to men who wish to become women... I didn't take Finasteride to become a woman. I took it to prevent male-pattern hair loss..."

Think what you will, but in my mind this poses an invaluable argument in the fight for GLT rights, and it's completely been ignored.

People against homosexuality love to claim it's a conscious choice, much in the manner a teenager will dye their hair to subconsciously rebel against mom, dad, and the world, regardless of what excuse they give. Of course, those who support free sexuality consider this bullshit.

In the case of a guy who swears he was a straight, average, moderately-intelligent man before swallowing the wrong pills, it would seem logical that if a forced chemical change is responsible for losing his old self, a withdrawal from the damn things could reverse the damage. But the point isn't in what I'm sure he sees as obvious.

The intriguing point is how he has no desire to go back to becoming hetero. Regardless of the fact it's based on something tangible; or how it has and will affect his life and perception on everything around him, the fact remains this is how he feels now. And being happy with that feeling is what gives him purpose - makes his spirit sing, if you will. Were it not a positively-charged and uplifting aspect of his very soul he probably wouldn't be in the dress.

Although the other possibility is that there are still people out there who lie to themselves by creating increasingly amusing excuses for living their lives well... like claiming a bald cure is why you're a woman. 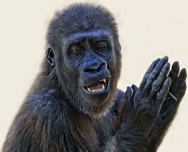 NEXT BLOG my latest blog