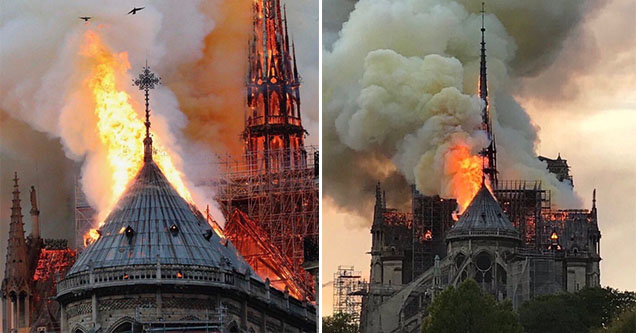 Earlier today the famous Notre Dame Cathedral went up in flames. While it's currently unclear what started the fire, officials think it may have been due to renovations. The 855-year-old cathedral was one of the greatest architectural achievements of the past thousand years and home to some incredible works of art. News of the fire spread fast, especially on Twitter where updates and reactions to the story are constantly refreshing.

Notre Dame Cathedral in Paris burns and with it so much history,
The world stands by so helpless as history disappears before our eyes pic.twitter.com/jbaepWOjuD

Right now, it feels that our own history & memory are turning to ashes of what transcends our lives. The fall of Notre Dame & many other symbols of our heritage happens at the same era. Our time. It feels like we'll leave behind nothing but scars. #NotreDameCathedral #NotreDame pic.twitter.com/OdfR8ohAXV

#NotreDameCathedral:
Good news: All the artworks have been saved. The treasure of the cathedral is intact, the crown of thorns, the holy sacraments.

The main spire of the Gothic cathedral, dating back to the 12th Century, collapses as flames burst through the roof.#NotreDame pic.twitter.com/97lsZ9ptmh

When you show up and the whole cathedral is in flames #NotreDameCathedral pic.twitter.com/VkeUjKX59W

I think we know who started the cathedral’s fire
Notre Dame pic.twitter.com/wWQnioos2C

Perspective is everything. The church Notre Dame in Reims was completely torched by the Germans in WW1. This was damage it has since been rebuilt. It's amazing how much survived time and all of its woes.  Sometimes it doesn't and some times we need to rebuild things. pic.twitter.com/2er6WvIWFt

Now for the horrible, sad and shocking news: Notre Dame is burning. The main spire has fallen, the roof has collapsed, and 800 years of French history is going up in smoke. Many priceless works of art and religious artifacts have been destroyed, and the fire still burns. pic.twitter.com/vsPVE6ujUt

BREAKING: Priest at Notre Dame says all relics and religious items have been saved from the fire. pic.twitter.com/p9yF5bvGCr

Notre-Dame: the ceiling has fallen. pic.twitter.com/OHd2Te1doC

Donald Trump had this to say about the fire.

So horrible to watch the massive fire at Notre Dame Cathedral in Paris. Perhaps flying water tankers could be used to put it out. Must act quickly!

Breaking News: Notre-Dame's towers were saved, but two-thirds of the roof was destroyed by fire. “The worst has been avoided,” the president of France said. https://t.co/3HhoTae74q

Crazy photo of the altar inside Notre Dame, by Reuters' Philippe Wojazer pic.twitter.com/KjRPSVKJRA