Normally I don't do faggy stuff with my girlfriend. I don't

watch chick flicks, I won't go to the mall with her to

"..just look around," and I have never taken her, or ANY chick to see

The Nutcracker. (title of THAT shit says it all)

Anyway, Girlfriend has a second job selling tickets at a local venue and

scored two free tickets to Duran Duran. She was going to

take our gay friend, Kevin, but he blew her off the day of

Because it was last minute, she was also turned down by 2

friends, her sister, and her parents. Sheeesh...can't imagine

why no one would want to go see such legends.

I started feeling sorry for her as concert time rolled around

because (and I know this is really gay) I love that girl. I

stop at the liquor store and get a "couple miniatures" of

code for a $10 bottle. In the liquor store I feel a slimy

tinglikg in my groin. I'm sure it must be the vagina I've

People-watching before the show: Drag queen, 40-something

dikes...but also a lot of young people. Guys and gals in

their early 20's. Also a lot of hot chicks to look at. My

vagina starts to tingle again. Am I a lezbo?

The band starts and I'm wondering which one is Duran and

which one is Duran and who the other guys are. Their first

song was probably one of their new ones. (yes...they have NEW

their MP3) Not bad actually. Very Pink Floyd-esque with deep

sustained bass minor chords. They play a bunch of songs. Some

I know, most I dont. "Hungry Like a Wolf"...who can EVER get

enough of THAT song. Some aren't terrible.

The light show is good, the music only sucks slightly but

that might be the tequila, beer, and my pussy talking. I buy a

bottle in the car! I'd have said something but my balls have been replaced.

Well, I pussied out. I went to a show for no other reason

thing to do. Next time I'm going to man up and tell her to go

to her gay shit with a friend or alone. If she gets mad I

donn't care! Withhold sex from me, bitch, I got my OWN 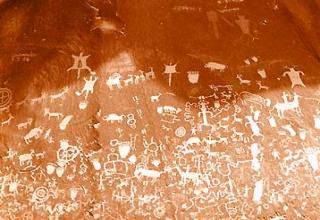 NEXT BLOG Beyond Man and Machines, Chapter 5.