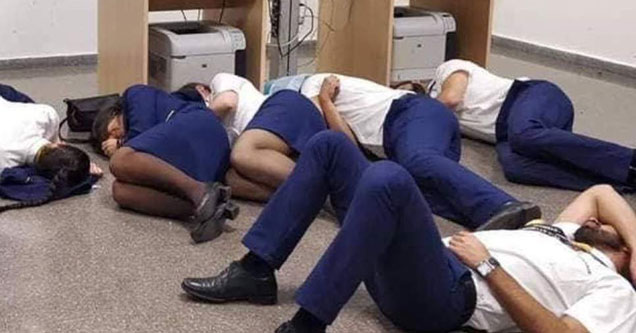 An image of a Ryanair flight stranded in Malaga, Spain all purportedly sleeping on the floor because Ryanair wouldn't or couldn't make proper sleeping arrangements went viral earlier this week sparking outrage.

This is a Ryanair 737 crew based in Portugal, stranded in Malaga, Spain a couple of nights ago due to storms. They are sleeping on the floor of the Ryanair crew room. RYR is earning €1.25 billion this year but will not put stranded crews in a hotel for the night. @peterbellew ? pic.twitter.com/lILWZVqqGj

@Ryanair is like #mafia.Strong with the weaks and weak with the strongs. Unfortunately the weaks are also responsible for passengers safety:when you see @Ryanair ‘s cabin crew sleeping in their jumpseats think about the pilots in the cockpits: completely fatigues and stressed out

Slavery in on the air

They are also sleeping in their uniforms they paid for

The claim is that the six flight attendants had been stranded in the Malaga, Spanish after their flight to Porto, Portugal was diverted because Hurricane Leslie made impact in Porto.

The Chief Operations Officer at Ryannair had this to say on Twitter:

Unfortunately. All hotels were completely booked out in Malaga. The storm created huge damage in Portugal. Later after this the crew moved to VIP lounge. Apologies to the crew we could not find accommodation.

That, as expected, led to more and more outrage. It's estimated that there are over 500 hotels and approximately 85,000 hotel rooms in Malaga, which made Peter Bellew's explanation seem even more disingenuous.

The matter was starting to largely recede from the public's mind when today Ryanair shot back with CCTV footage of the crew clearly staging the photo of them laying on the ground. Watch for yourself:

NEXT BLOG Do You Want To Get Roasted?