When news broke that Hulu would be rebooting Futurama, the long-running animated series developed by Matt Groening and David X. Cohen, fans were quick to celebrate.

Until it surfaced that the entire original cast would be returning with one notable exception: John DiMaggio, the original voice-acting genius for the surly, sh*t-talking robot Bender.

The production for the 20-episode run ordered by the streaming service (which has used Bender prominently in its promotional material) has its first table read coming up and without a voice actor for Bender finalized -- who is very much present in the reboot. On top of the chaos this fact alone has sewn among fans, news outlets have reported that Chris Pratt is being considered as a replacement for DiMaggio -- which seems to have come as good news to virtually zero Futurama fans.

It brings me no joy to report that Bender will be voiced by Chris Pratt https://t.co/eauqVJ9CKb

DiMaggio was originally slated to join his fellow co-stars in the return but negotiations reportedly stalled last November when DiMaggio reportedly claimed Hulu was low-balling relative to the market and value of Bender's iconic character. The conversation supposedly hit a standstill then and there due to something called a 'Favored Nations Clause,' a somewhat common clause in entertainment contracts that stipulates that each member of the cast be paid equally -- essentially, "I get what they get."

Reportedly, fellow cast members accepted the terms offered by Hulu, which -- because of how Favored Nations works -- somewhat 'locks in' the compensation. This means that whatever DiMaggio negotiates may have to be matched for the rest of the team.

And that's how things ended up with what many consider an unthinkable possibility -- a Futurama reboot without the OG Bender. Or worse, a replacement many find an ill-fit for the character. And fans are understandably rallying behind DiMaggio as the OG voice talent he is.

When I found out @hulu is trying to lowball @TheJohnDiMaggio and trying to replace the irreplaceable voice of Bender in the Futurama revival. #bendergate pic.twitter.com/BZrL70TCF8

Futurama without @TheJohnDiMaggio is insanity ! @hulu is too smart and knows we need our old friends together for the magic to work again.#bendergate pic.twitter.com/y9Zm4Q5ZvY

the fact that hulu supposedly can't get John on as Bender, and that "negotiations are at a standstill"

means they don't want to pay him

im not saying the full cast should go on strike and force hulu to hire John.. but wait, that's exactly what im saying #bendergate pic.twitter.com/zKw65UQyUJ

Futurama fans hearing that @TheJohnDiMaggio is not playing bender in the new series. #bendergate pic.twitter.com/q5wvIXjRyW

DiMaggio himself has yet to post another update on where negotiations stand now but did hop onto Twitter to thank fans for the support.

Thanks for the concern and the props, everyone. I really appreciate it. Don’t worry, I’ll keep you posted, but until then… CHEESE IT! #bendergate

The Futurama reboot is ostensibly aiming for a 2023 debut but the lengthy production process inherent to animation means that Hulu needs to close on the fate of Bender's voice sooner rather than later. 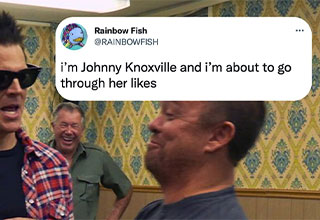