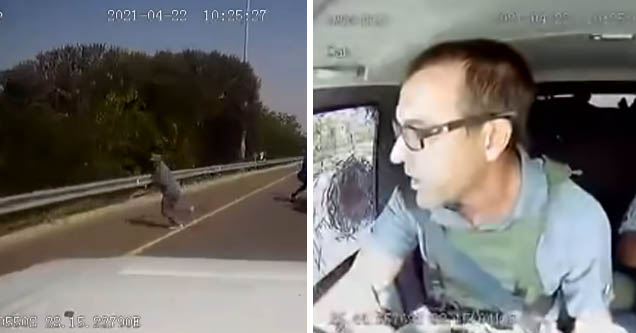 We previously shared the now-viral video of an attempted armored car robbery in South Africa that was foiled by the incredibly well-trained and brave driver of the armored car, and now we've got more context and additional footage of the day in question.

In case you never saw it, here's the original video below:

Newly-released dashcam footage from a camera looking out towards the road shows that the whole incident was even crazier than we previously thought with the robbers apparently exiting their cars at one point and nearly getting run over by our hero!

We've now also got more details on the identity of this incredibly brave driver: he's 48-year-old Leo Prinsloo, a veteran of the South African Police's special forces teams who also works as a shooting instructor for the military!

Speaking to the Daily Mail, presumably while calmly rocking back and forth atop his massive steel balls, Prinsloo said that the robbers "needed to take us out so they could take out the cargo vehicle," but that there was "no way [he] was going to let that happen." His only regret, apparently, is that "unfortunately [he] did not have a chance to return fire."

Towards the end of the video, we actually do see Prinsloo deciding to stop the van and take the fight to the bad guys as he grabs his partner's rifle and steps out of the van. A friend of his stated that he wasn't surprised by that move, but it seems that "when they saw Leo get out with his automatic rifle in a bulletproof vest and kneeling down to take aim they decided they had had enough and gave it up."

Here's the state of the van after all was said and done:

Good for the 2 in the van pic.twitter.com/gdnJVrkRIf

While no arrests have been made as of yet, it appears that Prinsloo's viral fame has already started to have consequences as he now faces death threats upon him and his family from the criminal gangs behind the failed heist.

We haven't heard if there are any upcoming movies about Leo Prinsloo yet, but we wouldn't be surprised to hear about it in the near future.