Amazon said it’s axing plans to build a new corporate campus in New York City, after succumbing to vast protests from city population, denying the city what the mayor and governor had called its biggest ever economic win. Needless to say, Twitter was there to revel in the news.

Amazon: “we’ll create 25,000 jobs we just ask for a 3 billion dollar tax credit”
NYC: “Cool, we’ll give you the credits if you will be more amendable to union work, or tie the credit to job creation”
Amazon: pic.twitter.com/ZaqhwCBsS8

We'd never pull out of anything #AmazonHQ2 (free premium today)

So nice of Amazon to pull out on Valentine's Day #AmazonHQ2

Still trying to figure out why people are bragging about losing 25,000 high paying jobs for there community #AmazonHQ2 pic.twitter.com/zdGfvta7pu

AMAZON HAS BEEN GIVING AWAY FREE BANANAS FOR YEARS NOW, SLOWLY BUILDING A STRONG SEATTLITE BANANA DEPENDENCE. NOW BEZOS HAS RELEASED HIS WEATHER CONTROL PRIME™ MACHINE AND WILL PROFIT OFF SKYROCKETING BANANA PRICES. NEW YORK, DO NOT BUILD AMAZON HQ 2 THERE OR YOU WILL SUFFER pic.twitter.com/WqOuFj3kw1

I'll give you this, Amazon: Telling people you're going to Queens and then bailing is one thing New Yorkers can relate to.

NEW YORKERS: no, fuck off

AMAZON: despite overwhelming support from the citizens of new york, we will no longer be building our new york headquarters 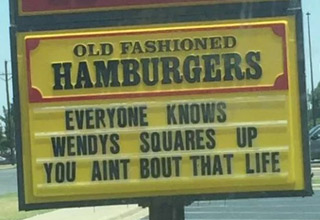 NEXT ARTICLE Challenger Steps to Wendy's IRL and Gets Rekt