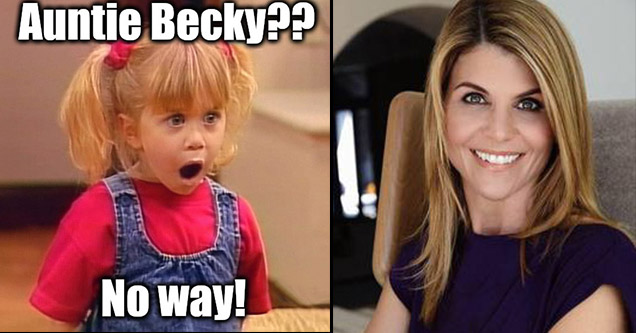 #FreeAuntBecky started trending today after Lori Laughlin, aka Aunt Becky from Full House, was arrested for her involvement in a massive college admissions scandal. She and her husband, Mossimo Giannulli, were accused of paying bribes totaling $500,000 dollars to get their two kids into school as recruits for the crew team. They were among 40 other people, including actress Felicity Huffman, caught in similar scandals.

The privilege is real. pic.twitter.com/RImIfzWSu8

I had to go and check Instagram to make sure this photo of Aunt Becky’s kid was real and it is very real. The unmitigated gall... pic.twitter.com/Gx1nYMYBSS

The scam involved parents paying for their kids to be able to cheat on their SAT and ACT exams. They would also bribe college administrators and coaches to recruit their children as athletes.

When you gotta break aunt Becky out of jail. pic.twitter.com/ouwPjstDnV

Aunt Becky's spin-off show is gonna be so good pic.twitter.com/TRr7RrWHIm

I have incontrovertible video proof that Aunt Becky is actually innocent and is taking the fall for Uncle Jesse. pic.twitter.com/gjGhvUMeYM

For $500,000 my child better be getting into Hogwarts, forget USC. Damn Aunt Becky pic.twitter.com/Dqh0I2Y9mg

According to the indictment, Huffman and her husband, William H. Macy, were told that her daughter would be able to take the SAT in a controlled testing center where they would arrange for a special proctor to administer the test and then correct the answers later on. This was done without their daughter's knowledge.

OF COURSE Aunt Becky had to commit fraud to get her kids into college. We all know these two were going to grow up to be dumb as hell. pic.twitter.com/ln5n2pPLrl

Judge: How do you wish to plea?

Judge: Please stop speaking in only Full House quotes or I’ll find you in contempt.

Aunt Becky: You got it dude!

Judge: Your still lookin at 29 years..

Ever since Uncle Jesse tried to help DJ cheat on the SAT we should’ve known Aunt Becky would be tempted pic.twitter.com/6Lx32IxH2J

we been knew Aunt Becky pic.twitter.com/80j11vzvhY

Update: Laughlin's daughter, Olivia Jade, was on a school official's yacht when news of the scandal broke. 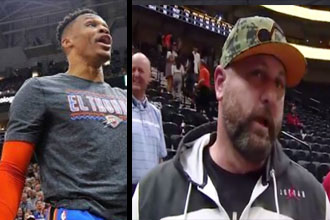