The British graffiti artist known simply as "Banksy" recently pulled off his greatest stunt to-date.  Known for his take on political and social issues, as well as other prank-like shenanigans, Banksy will have a hard time topping his most recent work.

Friday at Sotheby's Auction House in London, his painting "Banksy's Girl with Balloon" sold for a whopping $1.4 million dollars.  Mere moments after the gavel fell and the auctioneer yelled out "SOLD" the iconic image started to "self destruct".  A cleverly hidden shredder built into the painting's frame began to slowly destroy the painting.

Banksy posted on his instagram account "Going, going, gone..." with a picture that showed stunned onlookers as the shredded art emerges from the bottom of the frame.

"It appears we just got Banksy-ed," Alex Branczik, Sotheby's senior director of contemporary art, said in the news release.

No one knows who or how the shredder started operating at the key moment after the auction, though it was most likely activated remotely.

The auction price of $1.4 million for the spray paint and acrylic on canvas Girl with Balloon tied the artist's previous record set in 2008. 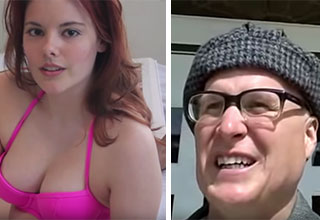