After rushing 18 times for 105 yards in Sunday's win against the Atlanta Falcons, Washington running back Brian Robinson was showing off some postgame swag in the Commanders' locker room. Robinson's 'big hat' was the talk of Twitter, as he downplayed the massive accessory only stating,  "I'm helping promote one of my guys."

BIG GAME, BIG HAT: After rushing for a career-high 105 yards, rookie @BrianR_4 breaks out the big hat, and we mean big!

"He makes big hats, so if y'all want one let me know." The company is called NogginBoss, and they've even been featured on SharkTank. You can customize your own big hat, and the prices range from about $75-125.

Brian Robinson said his friend has a “big hat” company. “If you want a big hat, let me know.” pic.twitter.com/KXm3GCJWO1

Even though the SharkTank audience wasn't totally sold on NogginBoss, it's not keeping fans and celebs from getting their hands on these bad boys.

Are you interested in CAP-italizing off this deal? #SharkTank

My guy @CoyWire been on that hat game since preseason…… pic.twitter.com/QeWPFeKWTo

They're an acquired taste for sure, but if you're in the market for one, hit up Brian Robinson on Twitter. He's clearly got the hookup. 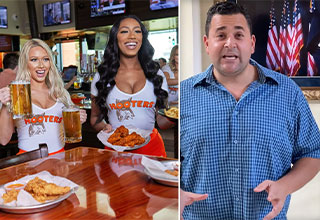