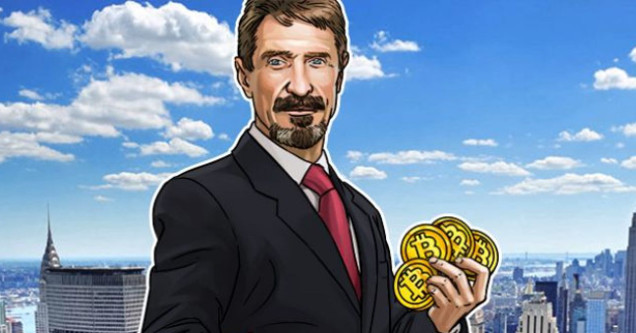 The cryptocurrency market has seen a boom during the past month that few anticipated, but everyone wants a piece of. With FOMO at an all-time high, even banks are feeling threatened by all the cash moving into crypto, and it's been accelerating as media coverage has continued.

Among the market's most notorious players is none other than John McAfee, creator of one of the world's first anti-virus software solutions, and outspoken ambassador of crypto. Many know him for his bold statement that Bitcoin "will hit one million per coin by end of 2020", and at the very least it'll break $500,000 or he'll "eat his dick on national television".

While certainly controversial, a lot of people are now listening to him for advice when it comes to investments. With more ears than ever listening in, he recently begun a daily social media series called Coin of the Day on his Twitter account where he recommends a specific crypto coin every 24 hours before briefly explaining why it's undervalued.

His daily posts—which are now supposed to be weekly—have had huge implications for the market. Recommended coins such as Tron, HMQ, and even Verge have seen dramatic spikes in demand following his tweets, allowing him, a single person, to have a tangible effect on a billion dollar industry.

In virtually every case these recommendations have triggered pump and dumps where the price of a coin more than 2x's in less than 30 minutes before diving back to normalcy, yet that still leaves plenty of opportunity for anyone with a trigger finger quick enough to invest the moment he recommends a coin before selling it at its peak.

Naturally, quite a few computer literate investors have set up bots that scan McAfee's tweets for Coin of the Day, buy up a large quantity of the mentioned coin, and then dump it just a few minutes later for massive profits. The reality is this is just about the only way to get in on the action, because the sheer speed of the market makes it virtually impossible to realize the potential of the value surge if you don't buy within seconds of him tweeting.

While it's been a fun run, what these botters weren't expecting is McAfee's Twitter being hacked, which is exactly what happened just about an hour ago. The hackers went on to recommend several coins that few would have expected. See for yourself: 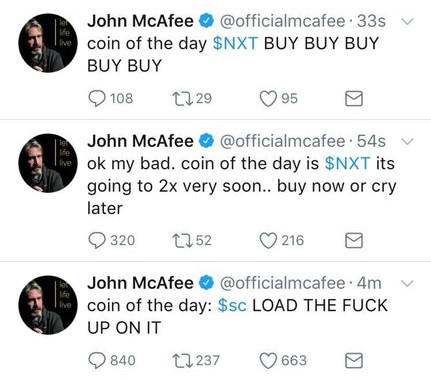 Each coin saw much smaller spikes in demand than usual in the minutes that followed, likely because average users could tell the tweets weren't genuine. For example, Siacoin (SC) jumped from 0.027296 per coin to 0.031848 within two minutes, a jump infinitesimally smaller than what Verge and other coins have seen after his recommendations during the past week.

However, when you look at coin volume, you can tell that the botters did their work, such as in the case of Siacoin below:

McAfee has since confirmed that he was hacked with the following message:

But it was too late. The bots already purchased huge bags of the three coins hoping to make a quick buck. Now they're sitting on coins that have been downtrending the past few days, and will probably see continued loss following today's bad press.

While botting may have seemed like a good idea, and it has been been, today was just a reminder that cheating only works most of the time. 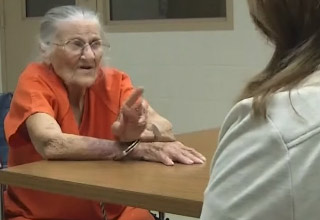