A man driving outside of Houston Texas recently witnessed a harrowing scene unfold before his eyes. As he was driving alongside a box truck, they came up on a crew of utility workers repairing a set of traffic lights.

One worker in particular was in the truck's bucket lift when the top of a box truck clipped the bottom of the bucket, leaving the worker dangling by his harness, in front of oncoming traffic. The video was captured by a dashcam and can be seen below.

The worker who was in the bucket is reportedly doing well and expected to make a full recovery. Andrew Wolf, the man who was driving the truck that captured the incident on camera told a local Houston news outlet

"The bucket shattered and spread debris on my truck, as well as on the bus...," Wolf said.

"Amazingly the worker was able to walk away when they lowered the crane." Wolf said the worker, as well as the driver who struck him, were shaken up after the ordeal.

Wolf said he wanted to check with authorities before he released the full video. 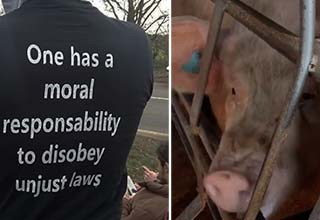