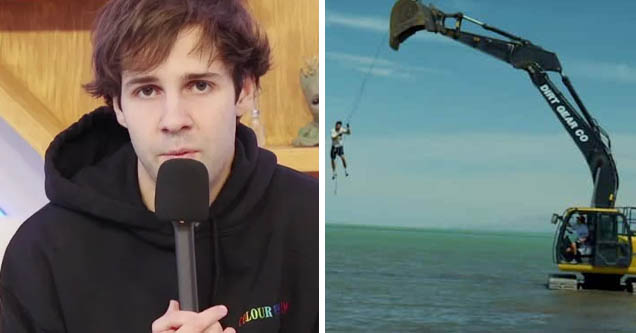 YouTube star David Dobrik has NOT had a great year so far. After he and his crew faced allegations of sexual assault and possible impropriety with minors earlier this year, Dobrik once again finds himself in the negative spotlight - this time being outed by a former member of his stunt posse.

Newly released footage of a stunt involving YouTuber Jeff Wittek, who was featured regularly in Dobrik's vlogs, and an excavator in a shallow lake paints a pretty grim picture of Dobrik's character. As Wittek swings from a rope attached to the end of the excavator, we see the machine - which is being operated by Dobrik himself as opposed to a licensed, experienced heavy machinery operator - slow its momentum rather suddenly, resulting in a hard crash that left Wittek with severe head injuries.

The footage comes as part of a multi-part documentary about Wittek's career for his YouTube channel, where you can watch Part 1 and Part 2 (sadly, the videos don't allow embedding outside of YouTube) to get a more comprehensive version of the story.

Never shy on voicing their opinions or dragging people (with the receipts to back it up), Twitter users were all over it:

Not some ppl replying saying "it's stationery you only need one hand" ‍♀️
a) he was trying to film whilst operating heavy machinery he wasn't qualified to operate. Paying attention to the camera rather than the machine
B) the excavator was not being used for its intended purposes

David Dobrik watching his friends be traumatized for 4 minutes of content pic.twitter.com/Qg3X9yfxsy

Jeff Witteck almost died filming one of David Dobrik’s vlog, he has life long injuries, physically and mentally. I can’t believe how irresponsible you can be, when you’re willing to risk your “friends” life for content. There’s a serious lack of empathy and common sense. pic.twitter.com/ZNcwHjHcA7

When you arrive at the party but only David Dobrik and his camera crew are there pic.twitter.com/wLEWbRaLXT

david dobrik at the hospital when jeff wittek woke up pic.twitter.com/OpLaBgGf6N

An under-appreciated part of the David Dobrik Jeff Wittek thing is that the lake was only a foot or two deep. That's how the excavator is out in the middle of it. So when David swings Jeff super fast he has to know that Jeff will break something if he loses his grip.

Some users also pointed out that YouTuber Trish Paytas had already called out Dobrik's douchey behavior quite some time ago and essentially prophecized that "something bad is going to happen in that group [...], someone's either going to die or [...]":

It should come as no real surprise that someone with a face as punchable as Dobrik would turn out to be a person who actually very much deserves face-punching. Nature is usually pretty good like that. Now we wait to get the inevitable cringey "apology" video - something Dobrik has done often enough that SNL actually spoofed it:

Hilariously enough, this spoof quite literally features a bit where the main influencer - an obvious Dobrik parody - actually throws a TV on his friend, potentially causing permanent injury.

When and if Dobrik posts an apology (which doesn't seem forthcoming as of now), we'll be sure to update it here. Until then, it's probably best we don't hear from him, hopefully forever.