Death on the Nile, a film already well-acquainted with controversy, was released to mixed-ish reviews in February and has since seemed destined to be half-remembered as a quirky but fun-for-some mystery movie of little note (except for the fact that it stars a would-be cannibal, of course).

The movie, as has become the new normal for filmmaking, relied heavily on CGI and other special effects to help set the scene in Egypt where the story takes place. However, perhaps due to budgetary concerns or sheer production oversight, many have pointed out several moments where it became a little too hard to suspend disbelief.

In the tweet that kicked off a Twitter roast-athon, check out the lighting on the characters in the scene down below compared to the fake pyramids they're supposedly standing on.

I believe CGI is getting worse even as the tech advances. I don't know if it's laziness or cost cutting but so many shots look so much worse now than in the nineties. Look at these shots from DEATH ON THE NILE. It looks like it was shot at a local tv station's weather map set. pic.twitter.com/eDt10FieyM

Just another example of the kind of scenes that have many opining for the days past when movies had seemingly found the 'sweet spot' of mixing practical and special effects. It is the extra care required for lighting a scene like this that has led Marvel to say "f**k it" and have every major outdoor battle scene take place under an overcast sky where shadows are minimal and the CGI is, well, easier. But not necessarily better.

Look at this entrance shot of Emma Mackey. Looks like a 90's blue screen shot. pic.twitter.com/xQP1wwviLc

I reacted to that scene, but to really appreciate how bad it is, you gotta look at this particular shot where absolutely no effort was made to look like Bouc's head existed inside the same time-space instantation as the pyramid. pic.twitter.com/U4Gx8Itdfw

It’s especially galling when you compare it to Jack Cardiff’s stunning location work for the 1978 film: pic.twitter.com/DvP94nZEm9

I call for a total and complete shutdown of digital effects until we figure out what in the hell is going on.

From a discussion about the movie immediately after release: 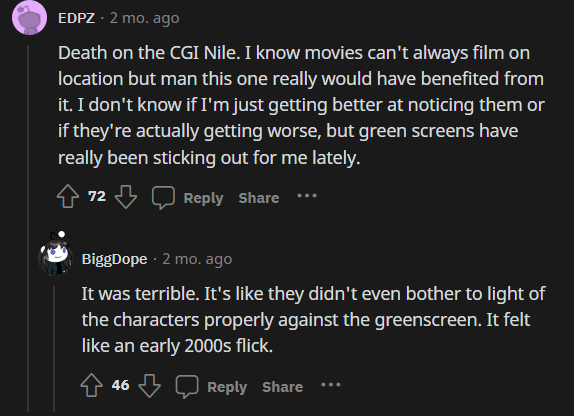 It's cost cutting, allot of films are finished at a 2k digital intermediate now. 90's movies on film. Which means allot of the CGI is streamlined in 2k too... they could render everything in 5k and touch it up, but they simply don't due to time constraints and cost cutting. pic.twitter.com/kxSijsnR8l

This stuff is horrible. Watched LOTR the other day and it's insane how much better it was 20 years ago.

The original Twitter thread which kicked off the discussion, with its thousands of replies, is essentially now serving as a receptacle for all the anguish and frustration many feel at the state of CGI and special effects today. 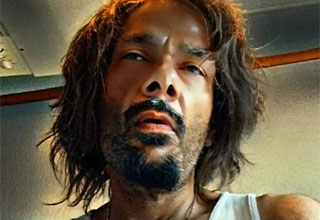