Hours after prosecutors announced that Alec Baldwin would be charged with involuntary manslaughter over cinematographer Halyna Hutchins’ 2021 death on the set of Rust, the actor’s wife, Hilaria, took to the streets of New York City with two powerful messages for the masses dunking on her husband: 1) Show some empathy; and 2) acknowledge the fact that she’s like, REALLY from Spain.

On Friday, January 20th, the mom-of-seven, who most definitely has uttered the words “i’M aN eMpAtH! !!!” at least once during her 39 years on Earth, was spotted running errands around her family’s Manhattan apartment. Donning a very apt forest green sweatshirt emblazoned with the phrase “Empathy,” Baldwin didn’t just let her garment do the talking, stopping to implore reporters for privacy amid her family’s legal woes.

Her apparent dedication to pretending she was DEFINITELY not born and raised in Boston, is impressive, and while we agree, that even the families of murderers deserve peace and quiet, her commitment to her fake accent is newsworthy.

“On a human level, you guys know I'm not going to say anything to you," explained Baldwin, formerly Hillary Lynn Hayward-Thomas, her *allegedly* faux Spanish accent on full display, before begging the crowd to leave her “family in peace and let this all play out."

"Let my kids come home and you stay away from them because they ask me 'Mommy, what, like, what are these people doing?' And it's a very hard thing as a mom to try to explain," the Massachusetts native continued, her dialect somehow more closely resembling Rosalía than fellow Bostonians like Mark Whalberg or the late Barbara Walters (the latter only partially due to the fact that she’s dead). 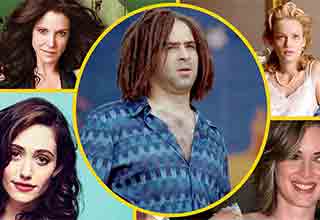 NEXT ARTICLE Adam Duritz Was the Pete Davidson of the ‘90s